How was your weekend? Here was ours, in a few pictures…..

T-ball can be fraught with terror, but we must push on!…

Things are in bloom here in San Diego….

Are your kids obsessed with Legos? My son built this “basketball court” this weekend. The big droid’s doing a throw-in — the ball is a minifigure head….

We spruced up our little garden. Being in the Navy, Dave and I long for a big in-ground garden of our own!…but that will have to wait.

Time to get on to the book reviews! Hope you all had a good weekend, too. 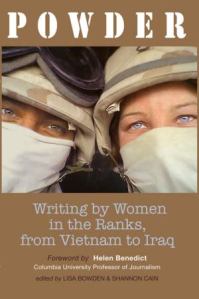 I finished a remarkable anthology the other day: Powder: Writing by Women in the Ranks, From Vietnam to Iraq. It’s published by Kore Press (a women’s press out of Tucson, AZ) and features primarily poetry and nonfiction by 19 different contributors, all women who served in the Armed Forces at some point in the last few decades. These women worked in roles as varied as air traffic controllers, mortuary affairs officers, translators, mechanics, tanks drivers in convoys. Their writing is impressive, sophisticated and nuanced; much of it is funny, and all of it’s heartfelt.

I thought reading Powder would feel like reading a literary journal — little tastes of this and that — but it has a very cohesive and finished feel to it. By the last page I felt like I’d been on something of a journey. I got a sense of what it would be like to be in such a minority — on some bases, female Marines were outnumbered by 200 to 1 — and to have to carry the burden of being a representative not just of my own self, but of my whole sex.

There’s so much variety to these pieces that I’ll list a few representative lines here to give you a feel for it:

Nothing mattered like taking care of the people who came to us. (p. 6)

The day a new woman arrived on base, the news spread like fire. (87)

The moment I spoke up I was instantly liable. (69)

The Other Woman says,
Goddamn. That bothered
you guys? That was nothing. (83)