You know it’s a good book when you’re in a real life situation and think about how one of the characters would react. So, I’m sitting in the waiting room at the DMV for hours, and my inner goddess bitch whispers to me, “This is taking way too long, my love. Just slay these stupid humans and step over their warm bodies so you can renew your tabs!”

Yep. That pretty much happened. But hold on, let me explain. It’s because of this book. 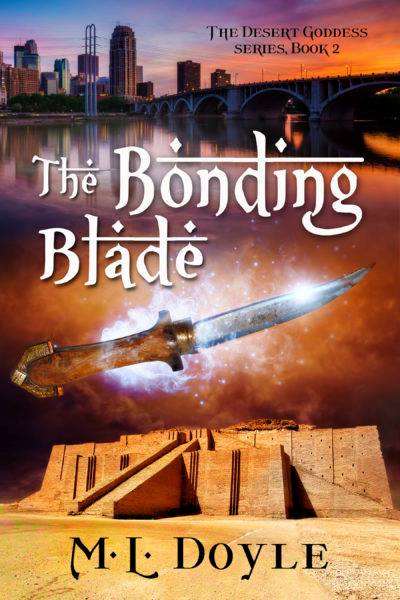 In The Bonding Blade, the latest book of the Desert Goddess Series by M. L. Doyle, Hester was serving in the Army in Iraq, when she picked up an old coin in the desert that bonded her to the ancient Sumerian Goddess, Inanna. Now back home seven years later, Hester has one foot twirling in the ancient mythical world and the other firmly in modern day Minneapolis.

As Hester describes it all, “Along with the goddess in my head came a few other accessories, like two warriors; Rashid and Quincy who are sworn to serve me. I also have two cougar-sized war cats for protection; Granite and Pearl, both of whom can switch into human form when necessary. Not to mention, becoming Inanna’s vessel made me immortal and gave me supernatural strength and the ability to propel myself from here to there. Oh, and there’s also a demigod [Gilgamesh, her on-again, off-again lover]. But I’m not speaking to him…”

The book has several layers that work perfectly. The first layer: Quincy is stricken with a mysterious illness, and Hester thinks a supernatural blade could save him, if only she could get her hands on it. The second layer: there are a string of strange murders by a possible serial killer that one of Hester’s employee’s may have accidentally conjured up. There are a few more layers that you’ll just have to read the book yourself and find out.

The relationship between Hester and Inanna has blossomed in a beautiful way from the first book, The Bonding Spell. In the first book, Hester resisted Inanna, who would often scold Hester, at one time calling her ‘petulant.’ In the The Bonding Blade, Hester becomes more of Inanna’s equal, and the bickering and bantering is intimate, and often humorous, in a ‘family’ sort of way.

Doyle has done skillful research into cultural mythology and she includes an ancient Japanese Onmyogi and a Disir from Norse folklore as characters. It’s a thrilling urban fantasy but also historically fascinating.

The end is not really the end, but then again it is. As Doyle takes us through the final battle, just when we give up during the darkest hour, in walks a sliver of hope. The “Gods” toss us a lifeline to encourage Hester, and us, to keep fighting the good fight.

Doyle, an Army veteran, has dedicated herself to writing about women in combat boots, from true memoirs (I’m Still Standing: From Captive U.S. Soldier to Free Citizen–My Journey Home, co-written with former US Army POW Shoshanna Johnson) as well as outstanding fiction. The Lauren Harper military mystery series includes The Peacekeeper’s Photograph, The Sapper’s Plot and The General’s Ambition. The Desert Goddess Series so far includes The Bonding Spell, and now, The Bonding Blade, due out summer 2019.

Doyle has offered an excerpt from The Bonding Blade; you can read here.

*The Bonding Blade is easily a stand-alone book, but I recommend that it be read after The Bonding Spell. Either way, you won’t be disappointed or lost no matter where you start.

Susanne Aspley (right; shown here at the 2018 War, Literature, and the Arts conference, US Air Force Academy) is the author of several novels including Granola, MN and Ladyboy and the Volunteer. She retired as a Sergeant First Class after serving 20 years in the US Army Reserve as a photojournalist with tours in Bosnia, Cuba, Kuwait and Panama. Somewhere in there she earned her drill sergeant hat.

Aspley also served in the Peace Corps, Thailand, 1989-1991. She then worked in North Yorkshire, England as well as Ra’anana, Israel.

She holds a degree in English Lit with a minor in Film from the University of Minnesota and is a graduate of the Defense Information School, Ft Meade, MD. Retired, she enjoys her kids, rescued pit bull, and surly cat in Minnesota. You can follow her at www.aspleywrites.com.