Skip to content
Date: April 13, 2018Author: andria816 0 Comments
by Alison Buckholtz Warriors fight battles. Writers craft stories. But when the warrior is also a writer—like Will Mackin, author of Bring Out the Dog, a short story collection based on his multiple deployments with a Navy SEAL team in Iraq and Afghanistan—nothing is as it seems. In a landscape illuminated by the hazy, green glow of night vision goggles, familiar literary terrain feels as foreign and full of possibility as another language. In these inventive, perceptive, and compassionate stories, that’s exactly the point.  And Mackin is just the translator America needs right now.

I opened Bring Out the Dog confident I already had the vocabulary required to understand the impact of 15 years of combat tours on America’s troops. As a Navy family (my husband flew the same kind of aircraft as Mackin around the same time), our most meaningful milestones are tied up with America’s longest war.  I’ve tracked the new generation of warrior-writers with great interest because the fiction, nonfiction, and memoirs emerging from the Iraq and Afghanistan conflicts–like Redeployment, Plenty of Time When We Get Home, Fire and Forget, The Yellow Birds,  Fobbit, Thank You For Your Service, and What Have We Done, among many other worthy titles—signal a shift in the way war is experienced and understood by combatants and civilians alike. That shift may eventually alter the way war is committed to and fought. 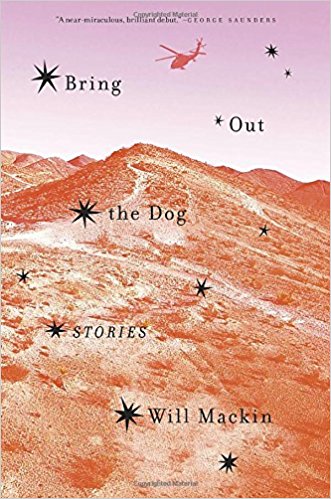 Bring Out the Dog isn’t concerned with that, at least not explicitly. Its only agenda is to demonstrate that the real drama of war takes place far from the battlefield, in the minds of the soldiers readying themselves for the fight and processing its aftermath. The 11 stories here take place in Iraq and Afghanistan, but also, importantly, in North Carolina, Utah, and Virginia Beach, where the narrator’s unit is engaged in pre-deployment workups.  These are critical elements of the combat cycle, in part because of the way relationships among soldiers evolve when they’re out of the war zone and yet still beholden to each other.

But Mackin presses beyond his own nuanced, moving portrayals of male friendships and battle buddies, and then past the deft and unexpected glimpses into his narrator’s inner world.  He starts to transcend the genre of “war writing” as his narrator describes the fleeting, searing moments that bond him to some Iraqi and Afghan civilians in the heat of battle.  This is from “Rib Night,” which takes place in Sharana, Afghanistan, after his unit’s A-10s have strafed a home and a woman from inside “ran downhill into our ranks, her screams no different from laughter”:

I saw her twisted face by starlight. I saw smoke rising from her house as an infrared blur on night vision. She reached out to me, which I shouldn’t have allowed, because she could’ve triggered my rifle, or pulled the pin on one of my grenades. Instead, she touched my arm, and her grief transferred wholesale. I sensed the absence of her father and son, and I felt her wish that I could bring them back. Had I wished hard enough she might’ve felt me wishing the same thing.

Capturing this and similarly intense interactions, Mackin introduces the idea that a human experience, however foreign to one’s own, can be conducted from one person to another—even in the most challenging circumstances–if one is receptive. Mackin and his narrator (he has spoken in interviews about the degree to which these stories are autobiographical) are both receptive. Even in the most morally ambiguous situations, Mackin crafts magical moments in which two people on different sides access each other’s agony. These depictions don’t offer hope; that would be incompatible with this particular war. But by allowing the warrior to connect with his civilian self, the civilian readers among us can connect with warriors. The experience of moral injury is transferred to us–people who have never been on the battlefield–through reading.

Although each of Mackin’s stories is its own universe—with an atmosphere and corresponding sense of dislocation unique to the situation—they can also be read together as a chronological portrait of a career that scrapes away any possibility of self-delusion. In “Crossing the River No Name,” set in Khost, Afghanistan during a night-time ambush of the Taliban, the narrator realizes early on that something crucial has changed:

This was the type of mission that earlier in the war would’ve been fun: us knowing and seeing, them dumb and blind. Hal, walking point, would’ve turned around and smiled, like, Do you believe we’re getting paid for this? And I would’ve shaken my head, like No. But now Hal hardly turned around. And when he did, it was only to make sure that we were all still behind him, putting one foot in front of the other, bleeding heat, our emerald hearts growing dim.

The “emerald hearts” are an allusion to the green glow of the soldiers’ night vision goggles, which turn landscapes into something a gamer would recognize faster than a G.I. The goggles register individuals’ heat signatures, and in many of Mackin’s stories they read like an aura, or personal subtext. “Whereas everybody else’s infrared signature appeared bright, and, therefore, a little desperate in the cool night air,” he writes, one soldier’s, Hal’s, “seems muted”—hinting, perhaps, at Hal’s eventual fate.

Just as these stories alternate between locations stateside and in combat zones, mimicking the tempo of today’s military service, some of the same characters (like Hal) reappear across the stories. As these soldiers get to know each other during successive deployments, we get to know them, too. Readers scouting the scene learn who’s afraid of water, who dislikes a certain candy, whose ability to stay calm can salvage unit morale. While the soldiers store away each nugget of information to determine who will save or sink a mission, readers of Bring Out the Dog are also hoarding the intel. Because in a world where nothing is as it seems—war zone or not—today’s warrior-writer may be our best guide in the dark.

Will Mackin’s work has appeared in The New Yorker, GQ, Tin House, and The New York Times Magazine. His story “Kattekoppen” was selected by Jennifer Egan for inclusion in The Best American Short Stories 2014, and his essay about being an extra on Breaking Bad, published in GQ, was nominated for an American Society of Magazine Editors “Ellie” award. Mackin’s debut collection of short stories, Bring Out the Dog, is on sale now, at your local independent bookstore and wherever books are sold.

Alison Buckholtz is author of Standing By: The Making of an American Military Family in a Time of War(Tarcher/Penguin). She wrote the “Deployment Diary” column on Slate.com from 2009-2010, and her other articles and essays have been published in the New York Times, New York Magazine, Real Simple, Parenting, Washingtonian Magazine, Salon.com and many other publications. As an advocate for military families, she has appeared on NBC Nightly News, NPR, and in national news stories. Her L.A. Times op-ed, “An ‘It Gets Better’ for the troops,” was the inspiration for a national public service announcement campaign about military suicides.