As a military spouse, it’s unlikely I’ll ever tire of weighty portraits of war that examine its causes, its costs, its legacies. But sometimes, I just want a novel to provide an entertaining escape. So I was thrilled to discover a more lighthearted journey through our world with Tagged for Death, the first in a series of cozy mysteries written by Air Force spouse Sherry Harris. Sure, there’s death in the title – it is a mystery – but I assure you, this book is cozy indeed. 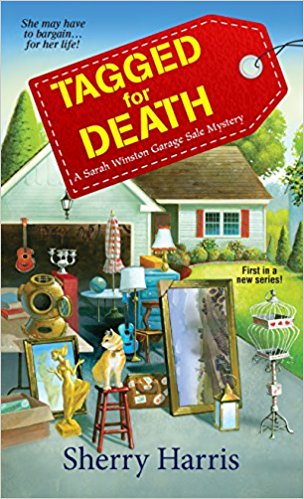 The delightful page-turner opens with a bang when former mil spouse Sarah Winston hears a gunshot over the phone courtesy of the prank caller who has been harassing her. Sarah figures it’s either CJ, her newly ex husband, or Tiffany, the nineteen-year-old airman he knocked up after a one-night-stand.

Sarah doesn’t report the calls to the authorities because, as fate would have it, CJ is the new police chief, a job he lucked into after the Air Force asked him to retire in light of his sex scandal. Sarah tries to get on with the business of building a new life, something she seems well prepared for after twenty years of military life. Although the civilian world is an adjustment, she appears more or less content with her new apartment and her budding business as a garage-sale consultant who helps people maximize sales for a share in the profit. Navigating a garage sale, or tag sale as these Northeastern characters say, is yet another skill she honed throughout her countless moves.

Alas, Sarah isn’t able to stay out of the fray for long because while sifting through a bag of items to donate, she discovers a bloody shirt with CJ’s monogrammed initials alongside a uniform bearing Tiffany’s last name. When Tiffany is soon declared missing and CJ becomes a suspect, Sarah starts investigating on her own. Intrigue, suspense, and a dash of romance follow.

Tagged for Death is not a powerful analysis of the effects of war. It’s not a war story at all, but it is a thoroughly enjoyable escape that travels through our world of PCSs and BDUs, base thrift shops and base housing, spouse club meetings and spouse book clubs, squadron gossip and Giant Voice announcements. Refreshingly, Harris reveals military families as regular people. (Well, regular people who solve close-to-home murder cases!). These characters are not portrayed as heroes to worship or bloodthirsty killers to fear or messed up veterans to pity. They are regular people who have chosen to live with change and to bear separation in service of their country. They’re people like us.

Sherry Harris started bargain hunting in second grade at her best friend’s yard sale. She honed her bartering skills as she moved around the country while her husband served in the Air Force. Sherry uses her love of garage sales, her life as a military spouse, and her time living in Massachusetts as inspiration for the Sarah Winston Garage Sale series. You can learn more about Sherry and her writing on her web site.

Novelist Tiffany Hawk, author of Love Me Anyway (an “irresistible”…”behind-the-scenes look at the airline industry’s emotional side”), is a former flight attendant. She has been published in the New York Times’s “Modern Love” column.