If you’ve ever stared at a word so long that it makes no sense–and you can’t remember a time it ever did or ever will again — you know how Selin, the young woman in Elif Batuman’s new novel, The Idiot, feels all the time. A first-year Harvard undergraduate majoring in linguistics, she sees language as a code. If only she could crack that code, she believes, she could decipher the baffling behavior and conversations of the people around her. 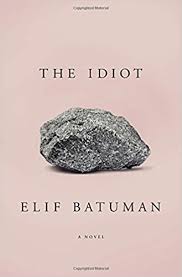 This is not an intellectual exercise. Selin, living on her own for the first time, more sheltered and less sophisticated than the other students, yearns to feel less alone in the world. And even though she suspects that solitude is her forever fate—that real connections are beyond her—she tries hard throughout her freshman year to synchronize with the new friends in her orbit.

Those friends are an endearingly eccentric group.  Batuman has said in interviews that The Idiot is loosely based on her own experience at Harvard, and for Ivy League wannabees this is a peek behind the curtain of day-to-day social life at that storied institution. It’s as satisfying as a peeping Tom’s adventures in a locker room. Selin’s roommates and classmates are fully and affectionately drawn: peculiar and opinionated, with histories and mysteries of their own.

None are as mysterious as Ivan, a senior math major Selin meets in Russian language class. Their intense emails to each other create a bond that they try to replicate in real life.  For Selin, it becomes an all-encompassing, urgent infatuation that drives thought and action. To Ivan, Selin is intriguing, but their connection is more a formula he’s trying to solve. He’s never really sure he wants to pursue something more with her, and neither are we. But for Selin, it’s love. Her first love. And it evolves into a quest that transforms her from a romantically inexperienced girl to a woman with a dawning sexual consciousness.

Rendering that in-between period—the process of selfhood shifting with age and experience—compels Batuman’s prose forward.  And in fact The Idiot is less about a girl’s unrequited crush and more about how it feels to hover seemingly indefinitely in the space after the “before” but before the “after.” We’re witnesses to a provisional period in Selin’s life, a passage of time that she’s neither prepared for nor welcomes but must endure anyway. Her mistrust of language (at times she can’t even answer the question “How are you?”), her tentativeness in conversation, and her paralysis when it comes to acting in her own best interest all convey a sense of stasis, as if someone has pressed the pause button during a movie and frozen an image mid-stride. Selin is stuck.

But we rarely mind being stuck with her, in part because Batuman’s own inventiveness of language energizes chapters where not much action takes place. A can of soda delivered from a vending machine sounds like “a body tumbling down the stairs.” Selin’s mother’s sandals were so exquisite that “they themselves looked like two well-turned women.” In Ivan’s dorm room overlooking the river at twilight, “bicycles and sculls streamed by far below with their blinking lights, like a galaxy.” There’s a turn of phrase on nearly every page, fresh and original, and each seems like a gift offered up to the literary gods.

As it happens, Selin is writing, too. She feels none of the hesitation on the page that she does in real time with real people. After one of her roommates forces her to submit a short story to a contest, she wins a literary magazine award. Even though she’s mortified by the attention, it affirms her desire to become a writer and transcend the boundaries of language.  The affirmation pushes her through literal borders, too:  following freshman year, she travels to Hungary and Turkey, and those experiences nudge her further toward the future that’s beckoning.

But Selin doesn’t conquer the “after” of adulthood.  By the novel’s end, we don’t want her to, because we understand that her “before” sensibility – before real heartbreak, before cynicism, before the practical finality of having to earn a living—is a state of mind she should hold on to for as long as she can.

Alison Buckholtz is author of Standing By: The Making of an American Military Family in a Time of War (Tarcher/Penguin, April 2009; in paperback April 2013).  She wrote the “Deployment Diary” column on Slate.com from 2009-2010, and her other articles and essays have been published in the New York Times, New York Magazine, Real Simple, Parenting, Washingtonian Magazine, Salon.com and many other publications.  As an advocate for military families, she has appeared on NBC Nightly News, NPR, and in national news stories.  Her L.A. Times op-ed, “An ‘It Gets Better’ for the troops,” was the inspiration for a national public service announcement campaign about military suicides.

One thought on “Hovering Between: A Review of ‘The Idiot’ by Elif Bautman”