When I turned the last page of Roxane Gay’s new memoir, Hunger, I took a picture of the cover and posted this to Facebook: 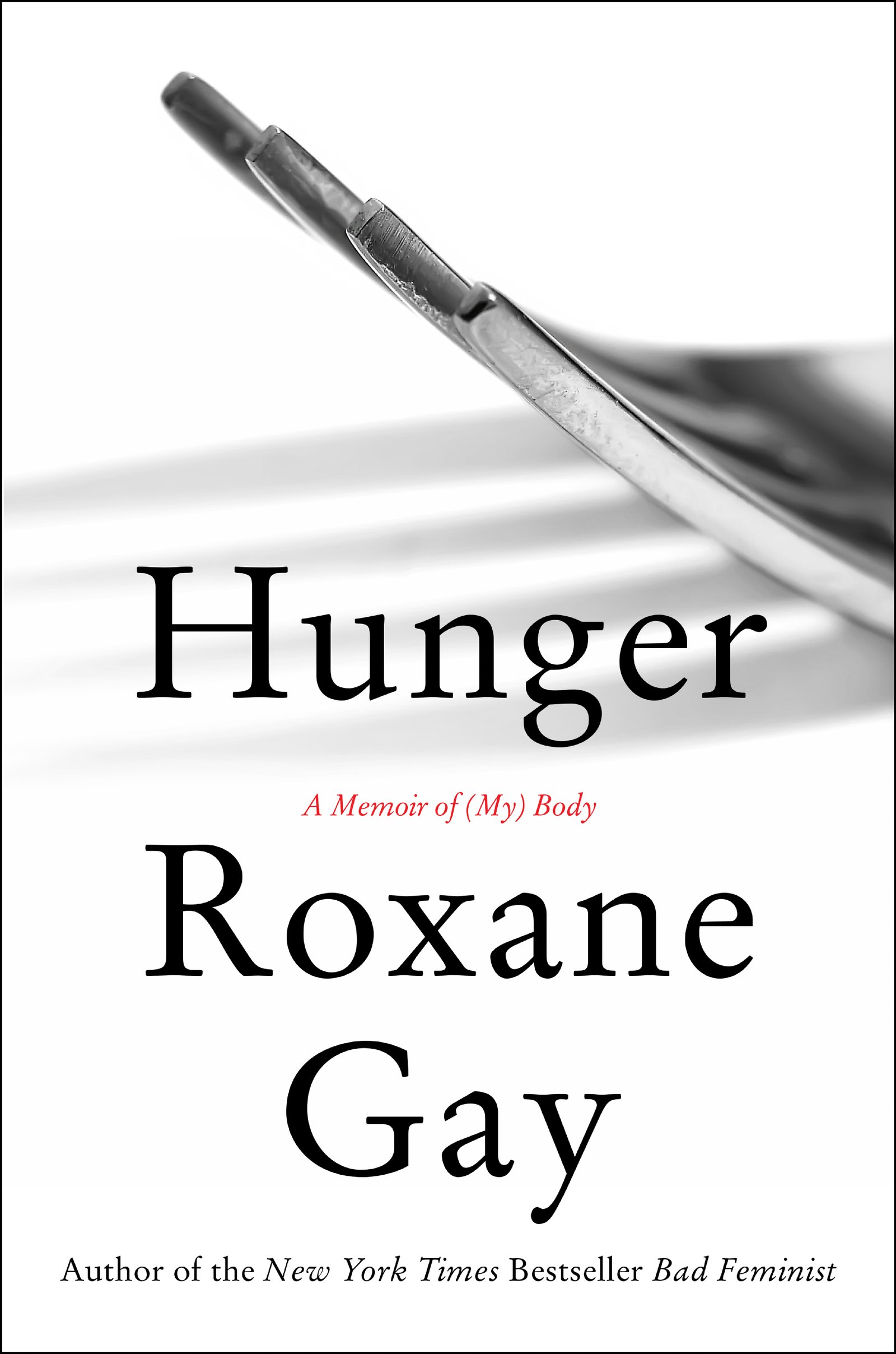 That same night, I gave the book to someone who needed it—they didn’t know they needed it, not yet—and bought a second copy.  That’s because there’s an urgency to Hunger just as there is to hunger: Gay is compelled to help readers understand and feel what it’s like to be “caged” (her word) in a body that’s “super morbidly obese” (her doctor’s words). She puts a number to it: In her late 20s, at 6 feet 3 inches tall, she was 577 pounds, though now she is a few hundred pounds less.

As she warns us early in the book, this is not a success story, nor the text equivalent of those grainy before and after photos where a skinny person poses in one leg of their former fat pants. It’s simply “the story of my body…not a story of triumph.” She says this in the stripped-down prose that conveys the excruciating difficulty required to extract and display the truths that reside in that body.

Her weight is the sum of her traumatic past. At age 12, she was gang-raped in the woods by a boy she liked, who had brought along a posse of friends to hold her down and take turns with her. She’d first developed a crush on this boy because he reminded her of a character from the Sweet Valley High series she devoured. When he asks her to the cabin and she sees his friends there, she’s so young and inexperienced that she doesn’t know enough to be scared—she’s simply hurt because “I loved him and thought he loved me.”

The brutal relentlessness of this rape is trackable in the way her real-time reaction to it evolves.  She tries to run, but it’s no use. She screams, begs, and fights. She prays, believing God will save her. The pain is constant. Finally she huddled into herself, shattered, silent, and unable to process what’s happening, but already filled with the self-hatred that she would carry for the next two decades.

She doesn’t confide in her parents, successful Haitian immigrants and practicing Catholics, because she has already internalized her own guilt. Looking for comfort elsewhere, she finds it in food. Family members try to talk to her about why she has become more withdrawn, but she refuses their overtures and keeps eating. In high school she starts to grasp at understanding when a counselor sensing the depth of her pain gives her a copy of The Courage to Heal, and she can put words to the horror. But it takes many more years—including her “lost years,” after she drops out of Yale and follows a series of lovers around the country—to work through the feelings that compelled her to wall herself off from anything or anyone that promised to be good for her.

So far – at least for those of us who read a lot of memoirs—it’s a compelling tale, well told.  Like many good memoirs. What separates it from the rest is the way Gay explains the day-to-day details of living as an overweight person in our culture. If you’ve ever been on an airplane where you’ve watched a flight attendant offer a heavy person a seatbelt extender—or if you’re the person who needed the seatbelt extender—you’ve already witnessed one humiliation among many that must be endured. Because this book is a memoir of her body, Gay explains not only why her body feels like a prison, but how she feels, as its inmate.

This is where Gay’s acuity as a cultural commenter (including as a New York Times columnist) is especially valuable. By situating her perspective in a much broader context, she offers readers a path to identify with her. In one typically short chapter, for example, she reflects on the way female celebrities’ figures are celebrated in gossip magazines and how blame is implicitly assigned to the rest of us who can’t achieve such standards. These skinny stars, she writes, “are thinspiration – thin inspiration – a constant reminder of the distance between our bodies and what our bodies could be with the proper discipline.” As for the celebrities, “The less space they take up, the more they matter.”

The inverse is true for Gay: the more space she takes up, the less she matters.  Even as she proves herself as a writer, professor, and public intellectual, people ignore her, berate her looks, call her names, neglect her physical needs, react as if she is repulsive, and treat her roughly. They see her rolls of fat and rule that she is not only unfeminine, but only half human.

But Hunger is not a litany of complaints. It’s a spare, stripped-down statement for the cultural record, a document that is determined to chronicle how life feels from the inside of a body that’s been battered by forces beyond its control. Its humility is authentic and its grace is hard-won.  Gay’s voice manages to beseech those who can’t yet understand, and comfort those who already do by assuring them that they are not alone.

Flipping through my second copy of the book, spotting passages that speak to why we are hearing this particular kind of story for the first time, no matter how broad or deep our bookshelf, I was reminded of an essay in Bad Feminist, Gay’s 2014 collection.  In it, she talks about her own quest, mostly unsuccessful, to be liked, then shifts to a discussion of defiant women in film and literature.

“When women [characters] are unlikable,” she writes, “it becomes a point of obsession in critical conversations by professional and amateur critics alike. Why are these women daring to flaunt convention? Why aren’t they making themselves likeable (and therefore acceptable) to polite society?”  And she concludes, “Perhaps, then, unlikable characters, the ones who are the most human, are also the ones who are the most alive. Perhaps this intimacy makes us uncomfortable because we don’t dare be so alive.”

Intimacy is certainly what Gay gives us.  And by daring to be so alive—emotionally imperfect and ready to admit all—she helps us to become more alive to people around us, and the many different kinds of weight they may be carrying.

Alison Buckholtz is author of Standing By: The Making of an American Military Family in a Time of War (Tarcher/Penguin, April 2009; in paperback April 2013).  She wrote the “Deployment Diary” column on Slate.com from 2009-2010, and her other articles and essays have been published in the New York Times, New York Magazine, Real Simple, Parenting, Washingtonian Magazine, Salon.com and many other publications.  As an advocate for military families, she has appeared on NBC Nightly News, NPR, and in national news stories.  Her L.A. Times op-ed, “An ‘It Gets Better’ for the troops,” was the inspiration for a national public service announcement campaign about military suicides.

One thought on “The More You Matter: ‘Hunger,’ by Roxane Gay”