Originally, I wasn’t going to attend the AWP conference this year: I thought maybe I’d save some money, stay home. Then, sometime around December, I felt very strongly that I wanted to go. There was a political aspect to it, sure; I was feeling as apocalyptic as anybody else with a brain; I wanted to connect with like-minded, literary individuals; and I was enticed by the notion of a hotel room and continental breakfast (I am easy to please). But even more that that, I just thought: All these people will be together, and I like them, and I want to say hi.

Not saying “hi” suddenly seemed like it would be really depressing.

So I went, and I said hi. Boy, did I ever. Happily, I was able to reconnect with old friends — including the one writer-pal I once had here in Colorado Springs, Angie Ricketts (author of the terrific memoir No Man’s War), who left CO last year because some strange glitch in her brain makes her love Indiana. The fun, sarcastic, slumber-party energy of rooming with Angie, who had me doubled over laughing many times and who has a cool-girl tip to solve my every problem (“Put your hair way up high on your head while you sleep and you won’t get a line in it! Higher than that, higher! Here, I have dry shampoo you can use! Here, I poured you some wine!”)  was equalled only by the delight of sharing the room with another mil spouse writer whose work I admire tremendously: Marine wife and poet Lisa Stice, author of the collection Uniform, who turned out to be as sweet and smart as anyone can be and, even better still, loves dogs. We talked about our dogs late into the night. I mean, in case my kids read this someday, we talked about how much we love our charming and well-mannered children. But also we talked about dogs.

(Also, this should reassure my husband, who must imagine that writers’ conferences are scenes of crazy debauchery, that I spent my wild, wild nights whispering to my roommate in the dark, like a middle-schooler, about dogs.) 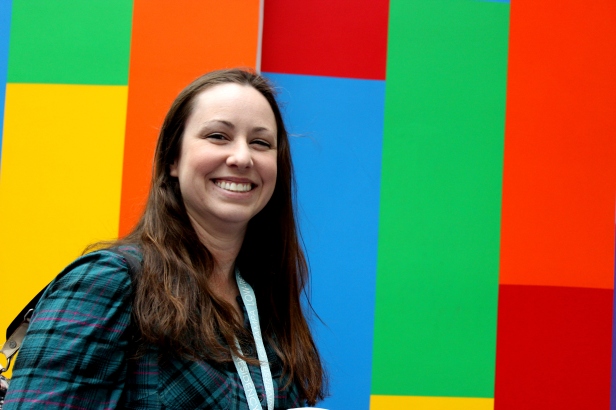 But, wait, this was a literary conference. And on that front, it delivered, to a degree that surprised me even more than I’d hoped. There was something liberating about AWP17 — maybe the way we were all blowing off political steam, but equally, I think, because of a change in the face of war writing, a move away from the stricter “first-person-shooter” narratives and into creative fronts that feel freeing, energizing, inspired. At a panel moderated by Peter Molin (“From Verse to Stage and Screen: Veterans Adapt”), Benjamin Busch (Dust to Dust) talked about zombie films and read what Molin described as “an intriguing scene about the peeling of an orange”; Jenny Pacanowski filled the room with her “Combat Dick” [bad pun? I’m in a cafe right now. I don’t feel like being academic -Editor]; Brian Turner led us in a group hum that, from a performance standpoint, had surprisingly respectable results; Jay Moad put his hat on backwards and channeled a disgruntled, bitter, and ultimately moving character from his play Outside Paducah. At another panel (“Citizen-Soldier-Poet: Using Poetry to Bridge the Civil-Military Gap,” led by Randy Brown), Air Force pilot and poet Eric “Shmo” Chandler got gutsy and read a poem that rhymed! We were liberated from stuffiness, from overcritical hyperthink. The feeling seemed to build as the conference went on, and panel-wide I felt like audiences were responding to it. At Molin’s panel the crowd laughed, applauded, asked questions; it was the best panel I’ve attended (take note, AWP majordomos!), and I’m sure I’m not the only one who left mind-abuzz with possibilities.

So the veteran-writing world seems full of vitality, with collections like The Road Ahead bringing many of the most-respected veteran writers together again for an encore literary tour, and an exciting forthcoming anthology, It’s My Country Too!, by Jerri Bell and Tracy Crow, promising to, finally, tell the story of female veterans in a comprehensive way.

But, because this is my little niche here on the Mil Spouse Book Review, I was thrilled to see that military-spouse writers are also entering new frontiers of creativity and quality. We were a rare breed a couple of AWPs ago, but I’m seeing signs that mil spouse participation in publishing and literary-scene-making is on the rise. 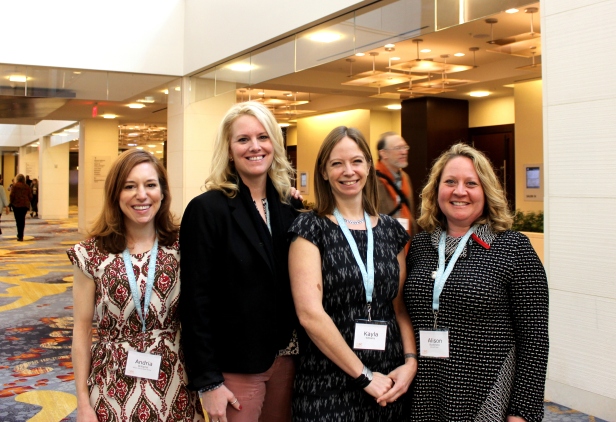 Yours truly; Army spouse/daughter/writer Angie Ricketts; veteran Kayla Williams; Navy wife and memoirist Alison Buckholtz, with whom I wish I could have talked longer!, author of Standing By: The Making of an American Military Family in a Time of War

Inside the book fair, I met Abby E. Murray, one of the editors of the new online lit mag Collateral, which is affiliated with the Unversity of Washington, Tacoma, and which showcases “high quality creative writing and art that explores the impact of the military and military service in spaces beyond the combat zone.”

This mission statement makes me very happy; while the “Chicken-Soup-for-the-Soul”-style writing that comprises the bulk of mil spouses’ publishing contributions certainly has value for many people, Collateral‘s emphasis on quality and creativity underscores a desire on the part of many military-spouse authors to join the more artistic eschelons of literature. Collateral‘s first issue features fiction by Stephen O’Shea and poetry by the likes of Lisa Stice, Jehanne Dubrow, Jennifer Conlon, and more, and there’s so much in it that is so good, I might have to write about it here separately. Not all contributors are military spouses, but the bulk of them seem to be, and in any case, it’s exciting to see more avenues open up for the literary-minded mil spouse writer. The fact that Collateral had so many high-quality contributions is exciting as well.

Mil spouse writers are continuing to put out works of longform as well as their own poetry collections; just off the top of my head, I can cite Elyse Fenton’s Sweet Insurgent (March 2017);  Kathleen M. Rodgers’s Seven Wings to Glory (April 2017); Siobhan Fallon’s upcoming novel, The Confusion of Languages (June 2017); and Jehanne Dubrow’s Dots & Dashes (August 2017), the description of which already has me wriggling in my seat:

Looking to Sappho and Emily Dickinson, the poet considers how the act of writing allows her autonomy and agency rarely granted to military spouses, even in the twenty-first century. Dubrow catalogs the domestic life of a military spouse, illustrating what it is like to live in a tightly constructed world of rules and regulations, ceremony and tradition, where “every sacrifice already / knows its place.”

On a more personal note, AWP17 granted me the opportunity to meet some writers I’d been hoping to cross paths with for ages: literary giant-with-a-heart-of-gold David Abrams, who is refreshingly humble and very funny; he gave me hopeful insights into the possibilities for married and family life post-military, as his wife, Jean, and his three kids were along for the whole ride of his Army career. (It will be the same for me, having married my high-school sweetheart long before he joined up, and for our kids, our oldest having been born while he was still in Intel school. We’re only halfway done, gosh darn it!). (David’s second novel, Brave Deeds, comes out in August and you can pre-order now, like I did!)

Another generous literary citizen, Matthew Komatsu, and I talked spirited children, literary agents, and literary gambles. Jenny Pacanowksi and I connected, though briefly, over (this will not surprise anyone by this point) our love of dogs, although I have yet to get a tattoo of my Springer spaniel on my shoulder to compete with her striking likeness of a former pet Mastiff. I was so happy to finally meet both Matthew Hefti (my book-b-day buddy; his gorgeous novel, A Hard and Heavy Thing, came out about the same time as my own book, and, p.s., his short story in The Road Ahead is terrifically scary and thought-provoking, worth the price of admission on its own) and his delightful rideshare, See Me for Who I Am’s David Chrisinger, who told great funny stories with a self-deprecating wit. 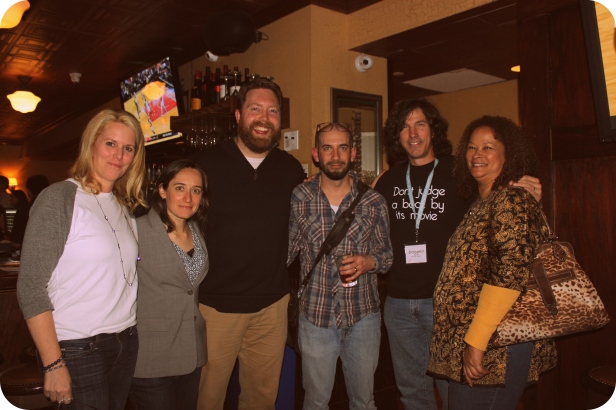 Of course, I also got to hang out with some of my old favorites again, especially Peter Molin, blog-inspiration-extraordinaire, smartest man in the room; the wry and funny Mary Doyle; Brian Turner, the world’s most brilliant teddy bear; weird and wonderful Benjamin Busch; fierce, intelligent Kayla Williams; Coast Guard vet Tenley Lozano and her beautiful service dog, Elu; Rachel Kambury, who wrote a war novel while in high school!; sweet and delightful nonfiction writer Lauren Halloran and poet husband Colin Halloran, whom I got to see perform for the first time, and he’s terrific!; inspiringly-dedicated Jerri Bell; talented-as-heck Jay Moad who made me a kickass Bruce Springsteen CD, which in my little world is like a secret handshake of kindred-ness. I hope these folks don’t mind my characterizations; these writers are all so distinct individually, but so much fun as a group. They are committed to their craft–to pulling others up along with them instead of falling prey to pettiness or competition–and to working for change and doing good in the world.

It’s pretty remarkable. I’m glad I got to say hi.

–> Hey, war-writers: I put all my photos from AWP up on a separate blog for you to see and download as you like. Enjoy!: https://awpwarwriters2017.wordpress.com/

For some other recaps of the AWP17 war-writing experience, here’s Peter Molin on “Time Now,” Eric Chandler on his blog “Shmotown” (that title alone makes me very happy),  and Matt Komatsu.