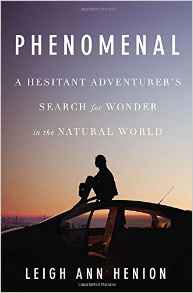 Leigh Ann Henion proves that it is possible and essential to be a wife and mother and still see the world. Her memoir opens with the birth of her son and her honest confession that she “cannot help but mourn the loss of something I can’t place. I have an inner emptiness — literal and figurative — that I’ve never felt before. It’s as though nourishing his life has built a new chamber in my body that is now cavernous and empty, waiting to be filled…I have never felt more alone.”

It is this voice — unflinching bare bone self-examination —that keeps me hooked through her pilgrimage in search of wonder. Three years before her son is born, Henion witnesses the monarch butterfly migration to Mexico on assignment for the Washington Post Magazine and realizes that she’s missing out on nature’s most spectacular shows. On her first trip after her son is born to see the bioluminescence bay of Puerto Rico, she learns that “nature has the power to completely disarm people.” In the lightning storms of Venezuela: “an admission of human frailty and the perfect magnificence of earth, the universe, time, in a way that removes the masks of humankind’s many religions to reveal their connectivity, the fact that we are — in the end — one.”

And if these revelations don’t strike a chord within, Henion introduces infrasound and indigenous ways of knowing on a burning volcano in Hawai’i. Beneath the Northern Lights of Sweden, Henion asks: “If I want to trust nature, to trust life, I can’t always be trying to control it. Haven’t I learned this by now? Isn’t this, like, a main rule of parenting? Will I ever really be able to just do the best I can and then just let go?”

On the great wildebeest migration in Tanzania, Henion realizes that if she were not having phenomenal experience after phenomenal experience, she would not be parenting her son in a way that awakens him to using plants, and landmarks, and symbols to make his way in the world. “If I were not being led by wonder, it is not the source from which I would teach.”

It is this parallel journey that Henion has with her son that lies at the core of this book. Henion says in an interview, “My son is seeing trees for the first time and discovering pine cones and rocks and everything was amazing. And I was seeing the solar eclipse, northern lights, and everything was new and amazing…and then we were able to come together and explore together with that sense of wonder.” 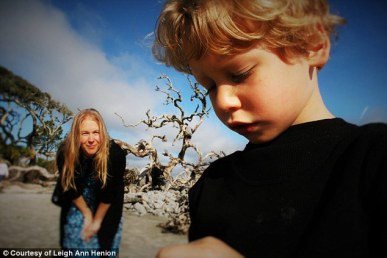 Henion ends her memoir with an unforgettable image of her son wrapped up in a blanket in her arms gazing up at the night sky and whispering something she learned on one of her trips, “We’re stardust.”

***
Not only does Henion place her readers in these visceral scenes of experiencing phenomena which she defines as “that which is amazing and that which is observable,” she also introduces us to shamans, indigenous leaders, reindeer herders, phenomenon chasers, people who are happily living what some call the “unconventional life.”

Henion writes in her introduction, “I had no idea there were lay people from all over the world, from all walks of life, already going to great lengths to undertake the sorts of phenomena chases I’d dreamed up. Some took odd jobs to stay under the northern lights. Others left white-collar positions to make time for swimming in glowing, bioluminescent bays. There were people who braved pirates to witness everlasting lightning storms, stood on volcanoes, stared into solar eclipses. They trusted their instincts, followed their passions, willfully shaped their days into the lives they most wanted to lead.”
Humphrey, a guide she meets in Tanzania, says this about his life: “I am free! I can go anywhere I want and look for things. I can move! There’s no stress — not that kind of stress when you are confined. I am never bored. To me, that’s what freedom means.”

A clinical psychologist named Kate, whom Henion meets in Australia, explains that eclipse chasers make choices that allow them to be in the right place at the right time. “I think people put restrictions on their lives. They perceive: I can’t do this because I don’t have the money. I can’t do this because of whatever…But if you’ve got that passion, if you’ve made that choice, it will happen.”

This is ultimately the gem I’ve uncovered rereading this book in times when I doubt the unconventional choices I’ve made in my life. Or worse, I miss out on the freedom that Humphrey speaks about when I decide not to do something because I think I can’t afford it or I’m worried about what other people think.
In particular, Henion bravely addresses what all of us mothers wrestle with: “does being a good mother mean devoting every drop of my being to my child, or does it mean being true to my spirit in a way that illustrates that there is more than one way to live a good life? Motherhood affects everything, but does it have to change everything about who I am and what I choose to pursue?”

As a travel writer and a soon-to-be mother of four kids, I berate myself with these questions all day long. It’s especially heart-wrenching, when well-meaning friends or family tell me that I shouldn’t do something because I’m a mother or that my decision to have so many kids means that I should always prioritize motherhood over my career. A Wisconsin Public Radio interviewer once said to Henion: “The script in our culture tends to have being a mother and being an explorer as mutually exclusive roles. You’re supposed to get your wandering and adventuring done before you have kids and then you’re supposed to nest and settle down.”

Critics have actually asked Henion how she could “abandon” her child or husband for a week, or whether she felt guilty about leaving her son “especially when he was just a baby, to go off on this wonder pilgrimage?” I, too, am asked these questions when I’m on assignment. It makes me wonder how often mothers are asked “what about the kids?” when they have to travel somewhere for work, and how often fathers are asked that question. In fact, I don’t think anyone has ever asked my husband whether he feels guilty abandoning his wife and three kids when he’s out-of-town five days every week?

Here’s her graceful response, which I’ve posted on my wall: “I think a lot of people will look at this journey and think it’s self-indulgent. I had to wrestle with this. All my life I was told that women can do anything. When I became a mother, I felt like that suddenly changed. There seems to be a who-does-she-think-she is to just go chase an eclipse. When we talk about following a script, that doesn’t follow a script. When you’re a new mother and you go to a professional conference for a week, it doesn’t seem like people would talk about that how awful it is that she went to a conference. But if you swim in a bioluminescence bay in Puerto Rico, it seems somehow self-indulgent. It doesn’t follow a script of what you’re supposed to be doing of what’s acceptable. It’s interesting because it is actually my job as a travel writer. I’m on a work trip. That really gets to what it is that you want to do, that you think you can’t because it’s not what you’re supposed to do even though it’s what you feel called to do. When people read Phenomenal, that’s what I hope they will ask themselves.”

So tell me, what do you want to do that you think you’re not supposed to do?

And if traveling and exploring might be your answer, consider Henion’s suggestion to see the next total eclipse which will cross the entire country on August 21, 2017. She says, “The highest number of Americans in a century will be able to easily reach its path. This is something people go out on ocean liners or fly to tiny islands to see, and it’s going to be within driving distance for millions. A great resource is greatamericaneclipse.com. I saw a total eclipse in Australia. It’s a tremendous experience; you’re seeing the face of the sun. And to witness it with other people, you viscerally experience interconnectivity.”

About the Author: Leigh Ann Henion is the New York Times best-selling author of Phenomenal: A Hesitant Adventurer’s Search for Wonder in the Natural World, about how she chased eclipses, migrations, and other natural phenomena around the globe to reawaken her sense of wonder. 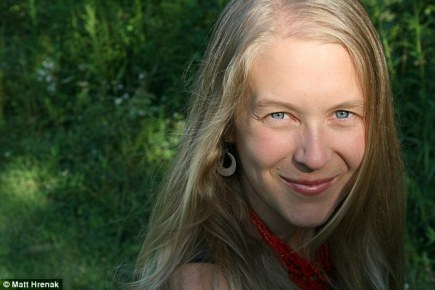 Phenomenal was named an editor’s pick by O, The Oprah Magazine, Backpacker, and Barnes & Noble Review. Elizabeth Gilbert called it a “gorgeously written and deeply thoughtful memoir,” and The Sydney Morning Herald declared that “even a cynic reading Phenomenal will yearn for a taste of wonder.”

Henion’s essays and articles have appeared in Smithsonian, Orion, and The Washington Post Magazine, among other publications. She has received a variety of accolades for her work, including a Lowell Thomas Award, and her stories have been noted in three editions of The Best American Travel Writing. Henion lives in the mountains of North Carolina.

About the Reviewer: An adventurer in her own right, Leslie Hsu Oh is an award-winning freelance writer whose work has been named among the distinguished stories of the year by Best American Essays. 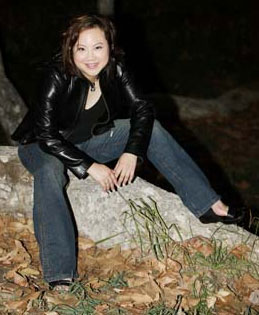 Leslie’s nonfiction articles are often concerned with nature, wilderness exploration, parenting, and native cultures, as in “How Canoes Are Saving Lives and Restoring Spirits” for Smithsonian and “Important Lessons About Giving from Alaska” on Today.com. She has written extensively about the joys and challenges of combining her love of wilderness adventure and native culture with the raising of three small children. 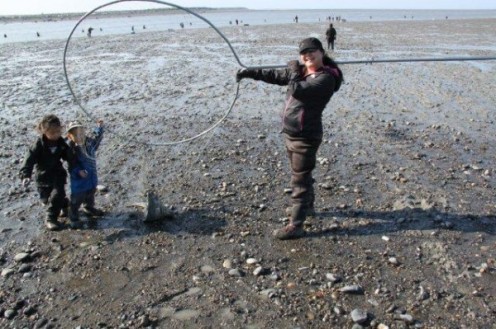 This review of Phenomenal is one of four reviews and interviews Leslie has contributed to the Military Spouse Book Review, all dealing with the theme of preserving one’s own inner wildness in the face of loss or challenge. You can read her review of Eowyn Ivey’s The Snow Child-which, with its Alaskan setting and themes of loss and hope, resonated strongly with her– here

I lost my mother and brother to the same disease when I was twenty-one. Eowyn Ivey’s language makes me forget for the moment that I’m motherless: “Through the window, the night air appeared dense, each snowflake slowed in its long, tumbling fall through the black.” It transports me to Alaska, a place I still call home even though I only lived there for seven years while my husband was with the U.S. Army Corps of Engineers.

As a mother [now] raising a nine-year-old, six-year-old, and one-year-old in the Washington, D.C. area, I’m often frustrated that I can’t give my children experiences like hiking with crampons on a glacier at the age of two when we lived in Alaska.