In Jehanne Dubrow’s fifth poetry collection, The Arranged Marriage, the primary female protagonist, Jeannette, is a keeper of secrets. Sometimes, it’s her emotions she tucks away; other times, it’s a blue silk dress, or a photograph; or, as in the opening poem, “The Handbag,” her secret is a large, heavy bag that she’s planning to use as a weapon against the man who has been holding her hostage ever since he broke into her apartment. 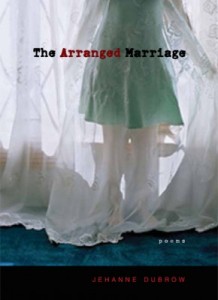 It’s an intense way to start a poetry collection, and it gives the book a narrative structure, a storyline, that’s as close to reading a novel-in-poems as I’ve encountered in some time. We don’t know how long Jeannette has been held hostage or if she will escape. We do know how the man broke in:

…He tells her, I heard a noise. By he is meant the handyman. And when there is no noise to hear, he bolts the door.

Later we learn that he read Kant in prison, “comics too black and white, dime-store pulp too literal in its black and blue.” He will kill her “if the night stays gray too long.” “There is an argument for anything, he says.” He is intelligent but amoral, warped by incarceration and whatever happened to him before that, and she, twenty years old, is his captive.

While the subject matter may be somewhat sensational, it’s rendered in such a way that we are firmly inside Jeannette’s point of view, her own intelligent (and moral) consciousness, her quiet mode of observation. This last attribute was what gave me hope that she would find her way out of the situation: Jeannette observes. She catches every detail. If this man has a weak spot, she will see it. And he can tell — as here, in one of my favorite lines:

Mustn’t leave her hands untied. She could stare the whorl from fingertips. Cut him with her eyes.

The event is based on real life: Dubrow’s mother was indeed held hostage at age twenty, and did survive what must have been a horrific ordeal.  Dubrow explores two more major events from her mother’s life: what she calls her mother’s “exiled Jewish/Latina childhood in Honduras,” and the marriage her mother was later forced into. These two events are slightly less dramatic but still deeply formative. The hostage incident takes place between the two, a harrowing fulcrum, the pivot point around which “before” and “after” are built.

The poems in The Arranged Marriage, for me, take a keen interest in the notion of survival: what it means to survive large traumas as well as the smaller, cumulative violences of everyday life. On a grander scale, Dubrow seems to be writing about the historical survival of women. When Jeanette’s attacker strikes her ankle with a hammer, it is “the pulse of pain one reads about…in the history of girls.”

Part of what a woman must survive is the constant tearing away from herself. “Nothing should tear,” Dubrow writes, “the way a loop of tape uncircles from itself.” A Jewish bride in the bedeken ceremony, veiled before her groom, is “burning with a last electricity that comes from being wholly all alone. It’s hard to hear her shatter.”

Changes in station– from girl to woman, unharmed to hurt, hurt to recovered, single to married, childless to mother– are more disruptive than most changes undergone by men, Dubrow seems to say. Her attention is to the almost inconceivable strength it takes for women to endure such change over a lifetime, multiple generations, a human history.

“Look,” she writes. “Look at the dress we sew from the shreds of other things.”

I was lucky enough to get to ask Jehanne Dubrow a few questions about The Arranged Marriage, and she generously responded. Her answers illuminate some of the finer points of the poems, as well as her choice of the book’s structure and the process of interviewing her mother, many times, in the effort to tell her story.

My favorite of Dubrow’s answers, however, was to my final question. I told her that I interpreted the book’s last line as a hopeful one: When Jeannette enters a darkened room and switches on the light, fearful because of her history of trauma, she sees that “No one is crouched and waiting with a knife.” Oh thank God, I thought: this is a note of healing.

And I think it is. But history doesn’t tie itself up neatly. So I love how Dubrow responds to my interpretation, in a way that makes me think the line actually means, “No one is crouched and waiting with a knife. [This time.]”

Thank you, Jehanne, for answering my questions!

Military Spouse Book Review: As a fiction writer, I am sometimes a little skittish around poetry, but I found your poems so enjoyable because of the stories they weave. The most striking, from the outset, is that of your mother being held hostage (by the apartment handyman?) at what seems a relatively young age. But paired with that trauma are everyday scenes of marriage, domestic life, and their own small violences. Can you tell me a little bit about the main stories you’re telling in The Arranged Marriage?

Jehanne Dubrow: The Arranged Marriage contains three separate but related narratives: my mother’s exiled Jewish/Latina childhood in Honduras, her experience of being held hostage when she was about 20-years-old and, in the aftermath of that trauma, the marriage she was forced into by her father. Although each story is distinct and its own, during the writing of the manuscript, I came to realize that I was writing about different kinds of forced intimacy, ways in which people are pushed together and the friction—cultural, linguistic, physical, emotional—that these different forms of closeness create.

MSBR: How did you decide on this structure for the book (the interwoven stories?)
JD: When I first drafted the collection, the manuscript was organized into three very clear sections, each one presenting one of three narratives that I mention above. And the book sat like that for a year, while I tried to figure out why the order felt so very wrong. Finally, I realized that the tidy structure of the book, its linearity, wasn’t reflective of the traumatized mind. So, I spent months shuffling the poems, ending up with a manuscript that skidded forward and backward in time, moving between hostage, marriage, childhood in a way that feels intuitive but not predictable. The result, for the reader, is disorientation and uneasiness. I think the experience of reading the collection is no longer as clear cut, the violence no longer reassuringly contained.

MSBR: In your poem “The Blue Dress,” you write: “That our parents have lives before us is a secret we close in a dark compartment the blue dress a body dragged from a lake.” What was it like to write so intimately, imagining details for, your own mother? Had she told you these stories spontaneously, or did you need to sit down with her and ask about the more concrete events in the book? What was that like?
My mother started telling me these stories when I was a very little girl; so, they feel as if they’re part of my personal mythology. But, when I began working on the poems that became The Arranged Marriage, I interviewed her extensively and separately about each of the three narratives. I would ask her the same questions many, separate times, because I was interested to see what new details we might uncover together. Because I was writing poems that needed to feel alive and tangible, our conversations focused as much on sensory information—touch, smell, sound, taste, sight—as they did on what happened when and where.

MSBR: While most of the poems in the collection seem to keep a close third-person narration, “The Replacement Ring” sounds to me as if it’s being narrated by the “you,” in this story – the daughter, the 2nd generation, the poet to the seamstress. “This, my husband says, is marriage. Something difficult to fit. And once we enter it, once we slide inside its circle, we learn to bend our bodies to its curve.”
I know that this poem is talking about a different kind of marriage – the voluntary, chosen, modern marriage – so I’m wondering what you had in mind adding it into this collection, with its focus on forced relationships and older-fashioned unions.

JD: Yes! This was one of the last poems I wrote for the book. Although most of The Arranged Marriage maintains a journalistic detachment—as you say, the collection is written largely in third-person—it became clear to me that I needed to embed a few more intimate moments about the speaker in the collection as well. There are several relationships based on compulsion in the book, and it seemed wise to present a contrast, a modern marriage that was both lovingly imperfect and entered into by choice.

MSBR: I loved this collection’s focus on what marriage means for women—“It’s hard to hear her shatter,” you write of a bride at a Jewish wedding – but I’m wondering how you imagine the experience of reading this collection might be for men?

The book’s tone isn’t angry or judgmental; its intent is not to make male readers feel defensive but simply to put them inside these experiences. The poems are very clinical and matter-of-fact in their presentation of violence and the ways in which men often seek to control women. Not all of the men in the book are terrible human beings, but it’s the women—and particularly the figure of my mother—who come off as heroes. They’re brave, strong, and resilient. The male readers who have talked to me about the book have said how much they empathize with the character referred to as “my mother,” how much they root for her, how afraid they are for her safety at certain moments, how relieved they are that she manages to push through her trauma.

MSBR: The last three poems in the collection seem, to me, to speak to the long memory of violence. Even with gradual repair, there is still trauma, and an act of violence can make someone feel unsafe even decades after the incident has passed. And yet the last lines of the final poem are, to me, almost soothing:

“And we enter this room, or any room, walk forward into the incandescent certainty that there are no surprises. Nothing is crouched and waiting with a knife.”

What do you want a reader to take, overall, from this investigation of violence and its aftermath?
JD: When the speaker says, “Nothing is crouched and waiting with a knife,” she knows herself to be lying. Experience has taught her with absolute, “incandescent certainty” that there are many terrible surprises, including the possibility that some danger is crouching in the darkness. But, that said, I really like the fact that some readers interpret this closing poem as optimistic, earnest in its assertion of safety and relief. Poems should do that; they should be able to hold one truth and its opposite. Poetry is an art form that exists in a gray rooms of ambiguity, refusing to give us comforting answers, preferring instead to disquiet.

MSBR: “Poems…should be able to hold one truth and its opposite.” I love that. I think novels do that, too. Maybe that’s why I loved this book so much. Thank you, Jehanne, for your time, and for writing such a gorgeous book.

Buy The Arranged Marriage from Indiebound, Powell’s, or Barnes & Noble

A review of The Arranged Marriage in Field Recordings

One thought on “Secret in the Shape of a Knife: Jehanne Dubrow’s ‘The Arranged Marriage’ (Poems)”