I love stories that deal with loyalty at their core, because I think it’s one of the most interesting human values: one of the most admirable, one of the easiest to drop in a pinch, one that becomes almost puzzling when carried through to its logical limit.

In Black Mass, Johnny Depp plays gangster James “Whitey” Bulger, who ran the Winter Hill Gang on the streets of South Boston for decades, with the FBI as his (first-unwitting, then-entrapped) allies. Depp’s Bulger is a strange, untouchable, ruthless man with a soft heart only for little old ladies and small children, and Depp plays him with a coldly calculating air. Beneath layers of makeup, including rather inexplicable eyeliner that seems left over from Captain Jack Sparrow, one never gets the sense that they know Depp’s version of Bulger, but because he is a legend, a con man, it didn’t get in the way of my enjoying the movie. Besides, its heart, for me, is Joel Edgerton as Bulger’s childhood friend-turned-FBI-agent James Connolly. 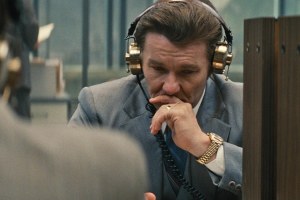 How can a man in mom-jeans do so many terrible things?

When they were kids on the tough streets of Southie, Bulger protected Connolly, and Connolly, with admirable loyalty, never forgot his debt. There’s a joke in the movie about how kids from Southie either grow up to become gangsters or cops, and Bulger and Connolly follow this split. Agent Connolly approaches a fresh-out-of-prison Bulger and proposes a plan: that if Bulger and his men can inform on the Mafia inching onto their turf, the Irish gangsters will be protected. Immune.

In both of these movies, dinner parties are a bad idea

Connolly doesn’t exactly create a monster in Bulger—the monster was always there—but he certainly ensures that Bulger has free rein to steal, gamble, murder, deal cocaine, and engage in a host of other things one would think an FBI agent might feel compelled to discourage. In the process, Connolly—gaining wealth and clout, buying fancy shoes, getting manicures– makes a monster of himself.

Stop it with the manicures. Your wife notices. Be a man

The fascinating twist? Connolly’s undying, stupidly stubborn, deeply admirable loyalty to Bulger. Even when Connolly’s found out, even when he faces jail time, he refuses to point the finger at the man who saved him as a kid – even if that man, as an adult, sold him down the river.

The real James Connolly is serving time even today for failing to name Bulger for his crimes. It seems, on one hand, idiotic, given Bulger’s lack of real loyalty in return. And yet, I won’t lie: there’s something to admire in that kind of fidelity. Either Connolly believes that Bulger has been loyal to him as well, or else he, not caring, sticks to his own promise to the point that he will pay for it, not just once, but with his whole life.
—-

The Gift
Thrillers and horror movies abound, but rarely do they come with the kind of Hitchcockian/Kubrickian smarts as does The Gift, a deceptively simple film starring Jason Bateman, Rebecca Hall, and Joel Edgerton (who also wrote and directed). 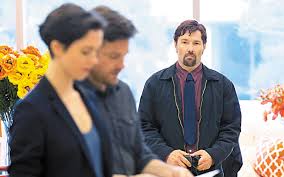 Simon (played by Jason Bateman) and Robyn (the gorgeous Rebecca Hall), new transplants to L.A., run into a former classmate of Simon’s while out shopping. Simon claims to barely remember “Gordo,” but Gordo clearly remembers him very well. Soon after, the couple returns home to find a gift left on their doorstep: a nice bottle of wine, signed by Gordo and with his trademark happy-face. Thing is, they hadn’t told Gordo where they live.

The gifts keep coming, Gordo keeps dropping by, and things start getting weird. It should be noted that the German word gift means “poison,” and as Gordo’s motives seem more suspect, this is exactly what he leaves time and again at Simon and Robyn’s door.

The atmosphere is perfectly creepy and unnerving, with the domestic sphere turned into one of terror, much as in Curtis Hanson’s The Hand That Rocks the Cradle. Simon convinces Robyn that her fears of Gordo are all in her head—he brings up some past problems with depression and addiction to cow her—but she feels certain that she is not alone during the day while she showers and sips tea and walks around her house which is made almost entirely of windows. You know what they say about people who live in glass houses—so when Simon writes a taunting note on the fridge white-board about Gordo, you know that Gordo is going to see it, you just don’t know where or when.

There are brilliant homages in this film, quick enough you almost can’t catch them: I was trying my hardest and caught three within five minutes. When Simon and Robyn talk to Gordo about his still-murky past, and you catch his whiff of a desire for revenge, it calls up Stephen King’s Carrie; seconds later Robyn is showering (Psycho) and then stirring a big, boiling pot on the stove (Fatal Attraction). Bam, bam, bam, one after the other, an almost-subconscious cluing into the dark underside of this love triangle—and those are only the ones that I, not an expert on thrillers, caught, so I’d love to hear more from someone better versed in the genre. I will say that the subtle clues in the film are perfect: in the dinner party scene, listen for the dog. I was excited that I caught it. I nudged my husband and hissed, “The dog! Do you hear the dog?!” And seconds later something big happened that made us jump in our seats. Him more than me, of course, because I heard the dog.

As the film goes on, you find yourself wondering who the screwed-up one is here: Robyn, or Gordo, or Simon. In what could be a brilliant re-imagining of The Hand That Rocks the Cradle, the ending leaves Simon not looking like a hero but in a very complicated position, and Gordo may get the last laugh. The final seconds are goosebump-inducing and a feat of plot and character, and put Joel Edgerton on my personal map as a talent to watch closely in the future. I wish I’d gotten this review up early enough to encourage my seven loyal blog readers to see The Gift in theaters, but I think it’ll do its job just as well on a home TV. I highly recommend it.