This past week, I was lucky enough to get to an annual gathering I’ve wanted to attend for years: the Association of Writing Programs conference, held this year in Minneapolis, MN. You can read a tongue-in-cheek synopsis of it here (“As a whole, they did not seem to be outdoorsy people”), but basically it is a conference for book-world people, primarily folks who attended one of the many writing graduate programs in this country. I forwarded this New Yorker article to several family members, including my dad, who wrote back, “Are you really glued to the blue screen, typing away in frustration, downing slugs of Jack Daniels, and hiding behind sunglasses?” I had to laugh. Of course not — like a lot of writers, I spend my days tending to small children, reading furtively while chili bubbles on the stove, and waking up at 4 a.m. to work on a novel.

One of the biggest takeaways from AWP for me was that the writing world has changed, and while there are still those lone artists who can indulge their penchant for whiskey and alone-time, there are also plenty of writers who might, say, be planning their family’s next military move, or showing up at 5:30 a.m. for PRT, or jotting down port-a-potty graffiti in an Afghan FOB as notes for their next novel. The military crew was, if not loud and proud, certainly present and dignified and welcoming and warm, more so than I ever could have dreamed.

I was thrown right into the thing by filling in for another author — the illustrious Cara Hoffman, whose novel Be Safe I Love You portrays the homecoming of a young, female Iraq War veteran — on a panel called “Women Writing War.” I’d found out about the vacancy 24 hours before and spent the 3-hour plane ride writing an endless ream of complete crap which I read over at 10 p.m. the night before, ripped to shreds, and re-wrote overnight just in time for the panel. 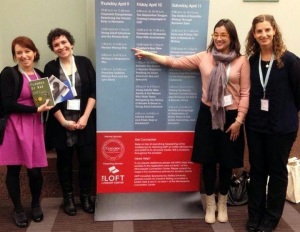 Hopefully I had something worthwhile to add to the conversation, although I stuttered a bit and could not hold a candle to my fellow panelists, Emily Gray Tedrowe (author of the recently-released Blue Stars, about two women tending loved ones at Walter Reed and reviewed on this blog here); Jehanne Dubrow, poet and professor and navy spouse, whose collection Stateside was reviewed on this blog back in October; and Katey Schultz, a fiction-writing idol of mine and author of the collection Flashes of War. We each presented for 10-15 minutes, talking about the female perspective on these recent wars, the role military spouses have played in recording and re-imagining these wars (that was my part), and the ways that women writers are imagining their way into situations they may not have experienced firsthand themselves, such as direct combat. 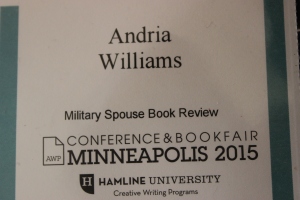 The Laminated Badge of Courage

While I was reading, I saw another hero(ine) of mine, Siobhan Fallon, sneak into the room and take a side seat. She was just in time to hear me read aloud from a short story of hers that I love, “Into the Break.” I wanted desperately to shout to the audience that she was here among us, but I restrained myself and just read her excerpt, which was very funny in a darkly comical way, and she confessed later that she’d never heard her own work read aloud and enjoyed seeing how the audience, unaware of her presence, laughed in all the right places. I also got to read some excerpts from Flashes of War and a fantastic poem by Jehanne called “On the Erotics of Deployment,” which I got to conclude with the fabulous line: “I’ll be the fruit kept edible on ice.”

After my own panel, I followed Siobhan to her first presentation, on a panel called ‘No Country for Good Old Boys: The Remaking of the Masculine in Contemporary American Fiction.’ She presented alongside Ben Percy, Kim Barnes, Shann Ray, and Alan Heathcock. I had never heard Ben Percy speak aloud before, and his voice was so unexpectedly low that it rattled light fixtures on the ceiling. Adopting a rather amusing, macho persona, he claimed that he writes with his testicles. The audience laughed. Percy, who once wore a “pregnancy suit” for 9 weeks, is comfortable messin’ with his masculinity.

Siobhan, a slightly less audacious (but certainly riveting) presence, shared the ways she mined life on Ft. Hood to write the male characters in her stories — not just male characters, but some of the most macho of the male, combat soldiers in an Army MOS that is still closed to women. She learned a lot, she confessed, by listening to conversations at an on-base Taco Bell. Whatever she did, it worked, because that book is genius. 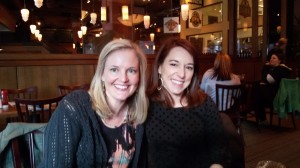 Siobhan Fallon and me. Can’t say I’m loving that angle on my schnozz, but I loved spending so much time with Siobhan!

Things just kept getting better as the war writers’ unofficial fearless leader, Lt. Col. Peter Molin, arrived. We all gathered around him, filled with well-deserved adoration. Peter runs a blog called Time Now, which discusses war literature, art, and film — a blog I’ve mentioned and linked to here many times before. He set up a fantastic dinner on Friday night for the military writers, where I got to rub elbows with luminaries way out of my league. 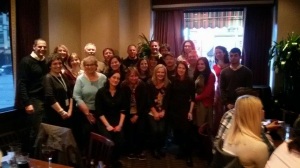 Among us was the soft-spoken and ever-wise Brian Turner, poet (his ‘Here, Bullet’ was reviewed by Amy Bermudez here on this blog, and his memoir ‘My Life as a Foreign Country’ is reviewed here on Peter’s); beautiful and brave Kayla Williams, Iraq War veteran and author of the memoirs ‘Love My Rifle More Than You‘ and ‘Plenty of Time When We Get Home‘; Teresa Fazio, former Marine and Iraq War veteran and writer, working on a memoir at current; First Couple of War Writing (to quote Peter Molin) Lauren and Colin Halloran; Ben Busch, big-time TV actor (The Wire!)

(there he be, in the middle, looking like The Edge!)

and author of ‘Dust to Dust‘ (also, the son of one of my favorite authors, Frederick Busch, who wrote a novel called ‘Girls’ way before that overblown HBO show)…

…And where was I. Got sidetracked by Ben Busch, as, I suspect, have many nice ladies before me. Just kidding! Alright, so I also got to meet Jerri Bell of 0-Dark-Thirty, a writer and 20-year navy veteran; the Boys from Colorado Springs — Jesse Goolsby, whose much-anticipated novel ‘I’d Walk With My Friends if I Could Find Them’ comes out in June; Brandon Lingle, writer, photographer, and staff member at War, Literature, and the Arts; James A. Moad II, novelist, WLA fiction editor, and the main man behind Veteran’s Voices Month, a month dedicated to hearing veterans’ stories:

This project is about bearing the weight of history into the present, like some vast meteor composed of every Veteran’s story, past and present, crashing into a great lake and breaking open. – James Moad on the WLA Blog

I could go on and on, but suffice it to say that the ‘links’ column on this little blog will be growing by leaps and bounds. I met so many other writers whose works I can’t wait to investigate and share, and, dangit, there just isn’t enough time!

Of course, the main focus of this blog remains writing by and pertinent to military spouses and female veterans, so that will help me narrow my scope in the coming weeks and months. But I’m excited. I’m excited about the wisdom and generosity and experience I could identify in every military writer I met at AWP — a sort of genial, slightly-gallows, forgiving good humor that was instantly familiar to me from the best of times I have spent with military people. Our community, when it’s working well, has a distinct feel, and I always enjoy and respect it, but perhaps most of all when it becomes its own little world in a sea of 14,000 writers-at-large.

7 thoughts on “Military Writers at AWP”