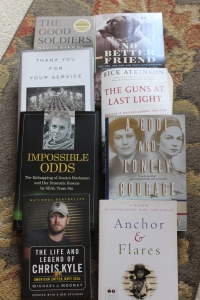 One benefit of starting this blog has been that I’ve been sent many books for review, some of which I might not have heard of otherwise and which ended up being favorite reads of the year for me.

The only drawback — I can’t possibly get around to all of the books I’ve been sent!

Generally, I give myself half a year and if I STILL haven’t been able to read a book, then I know I probably won’t get around to it. I want to say to these dear books, “It’s not you, it’s me!” — because it really is.

My big reading love is literary fiction — I’ve managed to read every novel I’ve been sent (or find a mil spouse reviewer for it). But because this blog is called the Military Spouse Book Review, people often send me nonfiction books to review, thinking I must be one of those history/war-memoir types. I appreciate those books, but if there’s a novel and a history book sitting in the basket by my bed at the same time, well……it’s been nice knowing ya, history book, but that novel is what I’ll end up reading.

Many people out there DO love history books and memoir, however, so for the benefit of those readers I’d like to showcase some terrific-looking books that I just haven’t quite gotten around to, but which YOU, blog reader, may just love. Nonfiction books often make great gifts, because you can tailor them to a person’s interests and I think they are a little less ‘personal’ in taste than novels. Anyway, here are some great books worth taking a look at next time you need a good read or a gift idea for someone in your life. 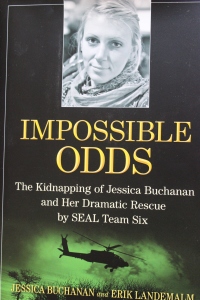 I’ve read parts of this one and honestly, it’s a thrill ride. Talk about an amazing true-life story: a young humanitarian aid worker is kidnapped by Somali pirates, held hostage for more than three months and finally rescued in the kind of daring, glitch-free SEAL operation we all love to read about.

The rescue took place on January 25th, 2015, just as the president was about to deliver his State of the Union speech. Imagine it: just as he steps onstage, 24 Navy SEALs rush a compound and kill nine terrorists with no harm to the two prisoners who are safely airlifted out on a military rescue chopper.

For any fan of real-life special ops tales or humanitarian missions, this book is sure to please.

2. NO BETTER FRIEND: ONE MAN, ONE DOG, AND THEIR EXTRAORDINARY STORY OF COURAGE AND SURVIVAL IN WWII by Robert Weintraub (Little, Brown & Co., 2015)

What a sweet story! Read the tale of Judy, America’s only canine P.O.W. in WWII. Judy was the companion of Air Force technician Frank Williams. When they were put in an internment camp together, Judy gave Frank the spark of hope that helped him to survive. She routinely risked her life for prisoners who were being beaten and survived bombings and many other hardships.Oh, Judy! I love you already.

This one is well-written and nicely paced and would please any animal lover or student of the Second World War. 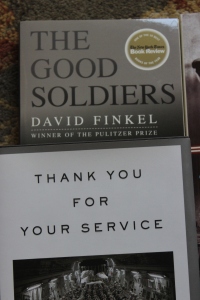 About a year ago, I read THE GOOD SOLDIERS and was moved, saddened, and disgusted by the experiences and treatment of soldiers serving on the front lines in Iraq. It’s not a book to take lightly: I was regularly so upset that it was difficult to fall asleep after reading. But it’s necessary knowledge, and anyone who takes war seriously will want to read Finkel’s Pulitzer-prize-winning reportage.

I have not yet tackled its sequel, THANK YOU FOR YOUR SERVICE, but Finkel’s writing is so good, so unsparing and so empathetic, that I anticipate it’s as gut-wrenching as people say. It follows the same men profiled in THE GOOD SOLDIERS after they return home from the crucible of wartime. I know that I will make myself read it, because I want to understand and I want to know what is at stake when we commit young people to wage wars far from home.

4. A COOL AND LONELY COURAGE: The Untold Story of Sister Spies in Occupied France by Susan Ottaway (Little, Brown, 2013) 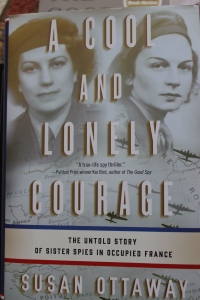 Here’s another fantastic story: that of two sisters, Eileen and Jacqueline Nearne, who both worked sending encoded messages to Allies during WWII.

“While Jacqueline narrowly evaded capture several times,” the jacket reads, “Eileen was tortured by the Gestapo and sent to the infamous Ravensbruck women’s concentration camp. Eventually, this resourceful young woman escaped and found her way to the advancing American army. She was only twenty-three.”

I sure hope this one is made into a movie. Until then — read the book!

The Guns at Last Light is the third book in Atkinson’s Liberation Trilogy, the first book of which won him a Pulitzer Prize. Honestly, as a novel-reader, I cannot imagine reading over 600 pages focusing upon ONE YEAR of the Second World War. Even just looking at it makes me nervous. But for history buffs, the Liberation Trilogy could make an awesome gift.

Also shown above — The Life and Legend of Chris Kyle by Michael J. Mooney (a story everyone knows by now, but fans of the movie might appreciate the book) and Anchor & Flare: A Memoir of Motherhood, Hope, and Service by Kate Braestrup, which is the true story of how Braestrup lost her husband, a police officer, and then had to face her son’s decision to join the Marines. Braestrup is a chaplain to the Maine Game Warden Service, and this book is spiritually-oriented as well as humorous. I plan to read it because I try to review all the books I’m sent that are written by military spouses, veterans, or moms; it’s not out til July of this year so I still have time.

I hope everyone out there is enjoying their own reading as winter (hopefully) wraps up and spring edges around the corner. Summer reading is on the horizon!

6 thoughts on “The Books I Have Yet to Love”