On Tuesday, after several changes in Dave’s travel schedule, we finally got word that he and another member of his team were on a flight home to San Diego and would get in that afternoon. I got Susanna bathed and she chose a dress to wear along with her “sparkle shoes,” and then we went to pick the big kids up from school about an hour early. They’d known there was a good chance that their dad was coming back that afternoon, but I’d been a little noncommittal because they’d had their hopes up (falsely) several times over the last week. So when I went to the front office and the secretary called each of their classrooms for them, it was fun to look out the window and see them coming into view from their separate rooms. Nora couldn’t contain herself and broke into a run. I gathered everybody up and we made the drive to the airport.

Once we got there, the kids were a jumble of nerves. I bought them some crackers to keep them occupied and we staked out a row of seats by the baggage claim.

I saw another little girl waiting with her mother and grandmother, wearing a blue sailor dress and waving a small American flag; the mom had a bouquet of balloons. I recognized them as Dave’s teammate, Miguel’s, family. Miguel was seated in a different section on the plane, so he got off before Dave. He was so excited to greet his family that he went right out the door with them, completely forgetting his bag. He was back, smiling sheepishly and waiting with us by the baggage claim, a few minutes later.

When we saw Dave, the kids yelped and ran toward the bottom of the escalator, but a rather grumpy security guy held up his hand and told them to stand back. The combination of excitement, relief, and her mortal fear of reprimand made Nora teary-eyed, but she held it together and was the first to hug Dave when he got to the main floor.

Soren was a little hesitant, and Susanna came tripping along clinging to my leg. I’d been worried that she might be very shy or even a little scared of him; she hadn’t seen him in 6 months, which is a long time for a two-year-old. But she stood next to me and watched him curiously and smiled a little. He had, cleverly, brought along a Hello Kitty necklace for her which he whipped out of nowhere like David Copperfield. She stood very still while he put it around her neck. I noticed that his hands were shaking, sweet man. 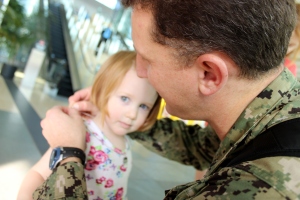 Well, Susanna’s not above being wooed by material objects, apparently, because she admired her necklace and then trotted along with us, holding my hand, already warming to her daddy quite nicely. 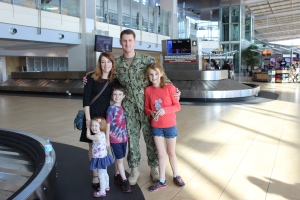 And just like that, we were a family of five again.

So far, things have gone smoothly with Dave home. Susanna bolted into my room to wake me up the first morning, saw Dave in the bed, and ran back out again in a silent panic. But each morning it takes her less and less time to warm up to him, and today it took about two seconds. She even let him put her to bed two nights in a row. When he did have to go back in to work for two days of redeployment processing, she asked about him a dozen times: where had he gone? when would he be back? When I’d answer, “Tonight!,” her little face would light up. 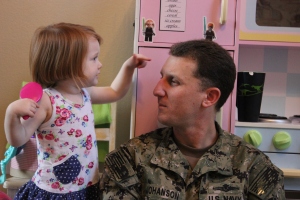 The bigger kids have also done well, other than being a little over-hyped at times and driving me bonkers. Soren desperately wants to rough-house with Dave, and play tackle football and roll around on the living room floor, but then he gets so excited that he’ll forget the rules and smack Dave on the arm or in the stomach. (BOYS!) Of course it’s not painful, but then Dave has to stop and remind Soren not to get so rough.

It’s felt a little funny having Dave back in our mostly-civilian neighborhood again. The first morning he helped me walk the kids to school, I felt like I was with a celebrity. It was almost a little embarrassing! Everyone stopped to talk to him, and I trotted out my, “Have you met my husband?” joke to so many neighbors in a row that I could hardly stand myself.

And it’s been sweet to see Dave take in all of the changes in the kids. He was most fascinated by Susanna, who’s running all over the place and telling long, half-comprehensible stories and lining all her dolls up to brush their hair and feed them plastic cabbage. “She’s like a little walking, talking doll,” he said, in wonder, as we left the airport that first day.

There are plenty of things I won’t miss about the deployment. I won’t miss doing all of the dishes by myself, that’s for sure. I won’t miss the spotty communication caused by wildly different time zones (Dave was a day and a half ahead of us), vagaries of technology (I just LOVE seeing myself frozen for 120 seconds in some bizarre half-sneer), and the weirdness of young children — for instance:

– Susanna clamoring for the phone, only to get ahold of it and shout, “SOREN SAYS MOMMY HAS YELLOW TEETH!” and then running away laughing, thereby cementing my husband’s mental image of his sweet bride for a week;

– or that call when Soren decided to try to communicate with his dad in a new language, via thumps of a foam LightSaber. (Your dad still speaks English, son!)

I won’t miss Dave-less holidays — my birthday, Nora’s birthday, Halloween, Thanksgiving, Christmas, New Year’s (and that, for only a half-year deployment, when some families give much more)!

I’m loving the ease of having a second parent in the house. (My mind was blown the other night at bedtime when Dave suggested, “You take the big kids up and I’ll put Susanna to bed.” I had to stand for a minute to realize that my workload had just been cut neatly in half. “…..That would be…..GREAT,” I said.) I’m loving the subtle change in a house’s feel when there is a man in it; it’s a warmer, more secure place with Dave here. (One of his first moves was to pull down the weird-looking cloths I had safety-pinned to the sheer front windows so that I wouldn’t feel exposed in the evenings — something that dawned on me right before Dave left, when, having gone out to grab a few items one night, I experimentally peered into the front window through those gauzy, useless curtains and realized that Dave was spotlighted on the couch in the living room, scratching his nose and watching TV, and that once he left I’d be just as illuminated in all my tired, sweatpants-wearing, equally nose-scratching glory.)

I’d dreaded the last six months and feared they would be horrible. They weren’t horrible. They were slow at times, and challenging, and tiring, but our rallying cry (“FAMILY TEAM!”) — as well as the help of my mom and dad, who tried to visit whenever they could — got us through. There we were, six months ago, all anxious and full of trepidation. Now it’s done; here we are.