Alison Buckholtz’s memoir Standing By: The Making of an American Military Family in a Time of War, begins with her husband trying to break up with her. Well, let me clarify: he’s her boyfriend at the time, and he’s doing it because he loves her and fears that her personality — intellectual, career-oriented, politically liberal, working for a successful non-profit in D.C. — doesn’t match up with the job description of “military wife.” But, being gutsy and adventurous (and in love), she reassures him that they’ll make it work. 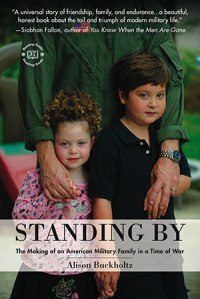 Standing By follows as Buckholtz adjusts to her new role, navigating the many ways she feels different from “textbook” military wives (she was “raised on feminism along with mother’s milk,” chose to keep her maiden name, and — “trump[ing] all the other elements of our lives that made us ‘different weird'” as opposed to “good-weird” — she and her family are Jewish). Despite all that, she gradually learns the ins and outs of military wifehood, coming to feel useful in her role as the “skipper’s wife,” handling the needs (new-baby visits, crisis management) of many other military families.

Everything, of course, gets trickier once children are involved. Though she mentions it only briefly in the memoir, Buckholtz gives birth to her firstborn while her husband is away flying in the “shock and awe” campaign over Iraq. (That’s the ultimate mil spouse “walking-the-walk” in my book; if it were me, I’d trot out that badge of courage every chance I got.)

Later — and this is the focus of the memoir — the War on Terror ramps up and her husband is sent on deployment, leaving her alone with two young kids (the gorgeous children on the book’s cover!) for the first time. Over the course of his six-month “cruise,” she weathers the deployment blues, deals with her son’s anxiety brought on by his dad’s absence, and grows close to the other military wives around her at their far-Northwest post at NAS Whidbey Island, Washington.

Her writing voice is smart, affectionate, and fun, and I found myself devouring pages as she retold some of her early military-wife fumbles, described the heartbreak of watching young children miss their dad (the sad-but-hilarious “Flat Daddy” chapter, based on Buckholtz’s 2007 column for the New York Times, made me laugh til I had tears in my eyes), and examined the way long absences can both challenge and strengthen a marriage. 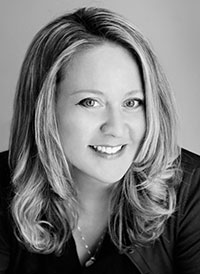 Standing By was the perfect read for this time in my life, with my own husband on deployment. I read it mostly in fits and starts when my toddler would doze off in her car seat in the van and I’d shoo my two older kids into the house to play by themselves until she woke up. All of Buckholtz’s feelings of not being “enough” for her kids during her husband’s deployment, her worries that her kids might not understand why their dad has gone away, her exhaustion at the end of the day — not only could I relate, I was living it at that very moment. I was literally not enough for anything — not enough to go around between both my younger and older kids, having to send the older ones into the house by themselves; not a good enough mom to get this stubborn toddler to nap in a bed but instead having to drive us all around for fifteen minutes until she fell asleep with her head canted weirdly to the side and drool rolling down her cheek; not enough to keep up the writing career I’ve always planned for but instead having only enough time and energy to read bits of other peoples’ writing in a messy van while wanting desperately to doze off myself.

But if I defended Alison Buckholtz to herself as I read her memoir — “You are enough!” I’d think, vehemently. “You are doing a great job, Alison Buckholtz circa 2007!” — then wasn’t I also enough, or at least, enough of enough? I’d start to chant little lists in my head: The kids are clean and relatively happy. They ate a good lunch. They are doing well in school. They do not cry themselves to sleep every night. 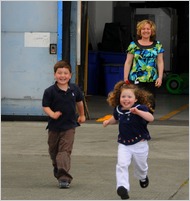 Is this not the cutest thing you’ve ever seen? Buckholtz’s kids running to meet their daddy — the kind of scene I’ve been dreaming about for the past half-year.

One of the pleasures of Standing By is that Buckholtz describes her foray into Navy life with an affectionate, anthropological eye.  I’ve grown so accustomed to certain quirks of military life that I’d nearly forgotten how odd they might seem to civilians, but her memoir reminded me. There’s the concept of “mandatory fun,” for example, 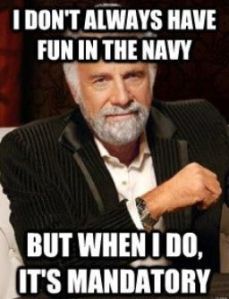 which a friend and I nicknamed “SAG Duty,” for “Shits-and-Giggles Duty,” back in Virginia Beach. We thought that was hilarious.

Or there’s pulling your car to a dead halt, for instance, at 5 p.m. on-base, as the sound system plays reveille out across the houses and corn fields and everyone is expected to honor it. Kids pull up short in their military-duplex front yards and the soldiers strolling home from work stand and salute where they are. That all seems normal to me now, this patriotic earnestness, but Buckholtz’s seeing-it-for-the-first-time eyes reminded me of my first reveille experience, when I nearly bumped into the stopped car in front of me and then rolled down my window and looked around (with a weird grimace on my face I’m sure) trying to figure out why every man and woman, in uniform or otherwise, had pulled up short as if a spell had been cast upon them.

In this comedic vein, one of my favorite chapters in Standing By describes Buckholtz’s first “Dining Out” experience as a new Navy wife.

For those who are unfamiliar, there are two types of formal dinners in the Navy: the Dining In, which is limited to Navy personnel, and the Dining Out, to which spouses (or other dates) are invited. A Dining Out is a highly orchestrated dinner which includes a host of archaic little rituals that have cemented the Navy’s “we are an old branch of the military, and a little weird” identity since 1775. One facet of a Dining Out, for example, is the “Grog,” a mix of any and all readily available alcoholic beverages served in a (clean) toilet bowl, supposedly reminiscent of the citrus-laced booze sailors once kept on board to prevent scurvy. In a modern Dining Out, however, its role is more whimsical. Individual sailors are called out for various, generally fabricated infractions and, before all the attendants, given the “opportunity” to slurp Grog from the bowl.

And the night just increases in quirkiness from there. It’s all very well-intentioned and goofy, and everybody laughs a lot, and us gals get dolled up to the hilt. 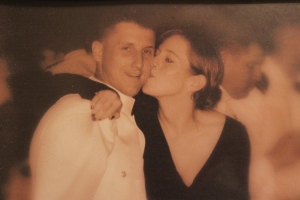 Dave was wrapping up OCS [Officer Candidate School — boot camp for officers] in Pensacola, which is why he looks a little peaked and gaunt, and I was 7 months pregnant, which is why I’m all resplendent and emotional. Okay, maybe just emotional.)

Anyway, when we attended Dining Out, Dave was the lowest man on the totem pole, a not-yet-commissioned officer who had only just been allowed to eat meals without standing at the back of a room and waiting for every senior recruit to get their food before him. Also, he was practically dying of the tuberculosis-like disease that all of his fellow recruits were swapping around. And he was doing weird things like dabbing clear nail polish onto the seams of his uniform, and hair-spraying his sleeves, because everyone was so petrified of failing inspections. They were all starved and neurotic, those poor recruits, turning into obsessive, muscular dandies.

So, our experience was quite different from Alison Buckholtz’s: she married into the military later, and by the time she attended her first Dining Out, her husband, Scott, was the Master of Ceremonies. If you have never been to a Dining Out, it would be hard to describe exactly how strange it would be to go to your first one and have your husband preside over the whole thing. Being Master of Ceremonies is a very particular job and it requires a knowledge of the event’s history and customs, a rapport with the audience, and perfect comedic timing.

I honestly can’t imagine my quiet Dave doing such a thing. If I were new to the Navy and he had presided over my first Dining Out, I think it would have blown my mind. So when Buckholtz tells about her first Dining Out, seeing her husband almost like this charismatic stranger, sitting at his elevated post in his dress whites before the whole assembly and banging his gavel and leading the whole show, and her mind is kind of blown, I just laughed out loud right along with her. The Parading of the Beef! — I had totally forgotten about the Parading of the Beef. Why, why parade the beef?! Who dreamed that up?

Parading the Beef — all pomp and fun, but do we ever think of those who must actually lug the beef? (photo by Erik Aguilar, the Epoch Times)

I’m sure I could write a lot more about Standing By, but I think Alison Buckholtz can speak pretty well for herself. She’s written dozens of columns and essays, and even met the President! Her book has had an amazing reception and I can see why: because you could read it as a civilian and gain an honest, entertaining understanding into what military families do; or you could read it as a military spouse and feel the comfort that comes from a shared burden.

For me, finishing the book (which ends with her husband’s return from deployment) whipped me into a near frenzy of excitement because that day is not so far off from us now, and I’m just craving that relief like nothing else: someone to help me with the bedtime routine, to answer a toddler’s repeated-for-the-tenth-time question, to hunker down for some serious chitchat and TV watchin’ on a drizzly winter evening. Heady days, these.

I have often wondered, she writes, what strange magic transforms a perfectly ordinary woman into a military spouse…In the last few minutes of our deployment as a military family, waiting for Scott to land, I looked at the women around me and realized that if there really is one characteristic that unites us, it’s not patriotism, not politics, and not religion. It’s not even love for our husbands….It’s endurance.

Buckholtz, Alison. Standing By: The Making of an American Military Family in a Time of War. Penguin, 2009.