“This letter recommends Melanie deRueda for admission to the law school on the well-heeled side of this campus,” Professor Jay Fitger writes in Julie Schumacher’s newest novel, Dear Committee Members. “I’ve known Ms. DeRueda for eleven minutes, twelve of which were spent in a fruitless attempt to explain to her that I write letters of recommendation only for students who have signed up and completed one of my classes.This young woman is certainly tenacious, if that’s what you’re looking for.” 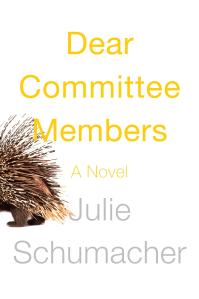 Professor Fitger is probably the last man you would ever want to ever write something so delicate, regulated, and diplomatic as your letter of recommendation — for anything. After two-plus decades in academia, some looming life disappointments, and the increasingly punishing burden of bureaucratic paperwork he’s being forced to produce, Fitger is firing off letters of recommendation, dutifully, for anyone who asks them of him, but don’t thank him yet — what those letters might contain is anyone’s guess. His honesty is hilarious and refreshing: “Mr. Duffy Napp has just transmitted a nine-word e-mail asking that I immediately send a letter of reference to your firm on his behalf,” Fitger writes, of a particularly unhelpful Tech Help employee. “His request has summoned from the basement of my heart a star-spangled constellation of joy, so eager am I to see Knapp well established [elsewhere].”

Remarkably, as these letters accumulate, a bittersweet portrait of Fitger emerges, and a cast of characters — each with their own desires and failures — takes shape. Will Fitger reconcile with the giants of his past, from the mentor he once worshiped, to his ex-wives-and-girlfriend (the deeply hurt Eleanor, the bitter Carole, and the patient, stalwart Janet)? Will he be able to secure a prestigious fellowship for his sole remaining grad student, Darren Browles, whose promise he touts even as Browles’s prospects grow gloomier by the day?  Will anyone in the novel live up to the early promise of his or her life? 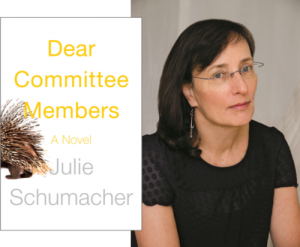 The friendly, oddball people-watching (and-skewering) gives Dear Committee Members its smart and perfectly-timed comedy. I laughed, no lie, on every single page. Its larger themes give it heft. Who doesn’t wish they had done something more with their life; who doesn’t regret a few things they’ve done or said? And despite all the politics, backbiting, drudgery, and thanklessness of academia which Schumacher lampoons so well, there remains a respect for the final work of art as something greater, more meaningful, possibly worth all the effort and toil. “You and I,” Fitger writes to Eleanor, “are in the business of believing in, and promoting, things that don’t yet exist…I can already envision the moment when I open Troy’s new book and find within it, among the acknowledgements, your name and mine; and we both know how beautiful the book will be, how clearly it will speak to something within us — some previously unarticulated thought or reflection that, once recognized, we will never want to be without again.”

Put together, Jay Fitger’s collection of letters may be his opus magnum (and Schumacher’s as well). “I recall,” he writes to the Dean, “…that as much as you detested my [letters of recommendation], you found them more engaging than any of my novels.”

Schumacher, Julie. Dear Committee Members. Doubleday, 2014.
—-
p.s. I highly recommend this book as a gift for anyone in your life with a good sense of humor, and for anyone working in an academia or office setting. They’ll recognize characters in these pages, and they’ll laugh out loud.

p.p.s. I should mention that Julie Schumacher was my advisor in the Creative Writing department at the University of Minnesota some years ago; being no Jay Fitger, she was wonderful in the role, generous with her time and enthusiastic about her students (to whom she has dedicated her book). She once told me I had “a weird imagination” and she did, indeed, write me more than one letter of recommendation.
—-
Buy Dear Committee Members here and here
Julie Schumacher’s web site