In these last few weeks of 2014, I wanted to make sure to mention a couple of books I read which, though I didn’t get a chance to review them here, made a big impression on me. I think — pardon me as I get a titch commercial-minded — any of these would make fantastic holiday gifts for the readers you like best on your list. In the next few days I’ll also re-list, by category, a few of the books our mil spouse contributors enjoyed most over the course of the year (or at least the last 9 months since this blog began) in case you need a little gift-giving inspiration. Books really do make the best gifts!

Without further ado, here are a couple of my fiction favorites that have gone, thus far, mentioned by many but unmentioned-by-me:

— The Son by Philipp Meyer
Empires rise and empires fall; that’s fascinating enough in itself, but when you look closer, at the lives which populate those empires, that’s when you have a novel.

The Son came out in 2013, but it’s in paperback now, so it’s handy for gift-giving if you don’t want to break the bank. Not to brag, but I have the hardcover and with its faint, scratchy, wild-horse cover and deckle-edges pages, it’s a beauty.

Still, the fine-looking book can’t hold a candle to the story contained inside, a multi-generational saga of a Texas oil-and-ranching family, the choices they make, and the consequences of those choices. At the story’s heart is Eli, known as “The General,” captured from his homestead by Comanches at the age of thirteen and unexpectedly thriving because of his ability to adapt. Eli’s chapters were my favorite, with their traditional-Western flavor and the sheer amount of action contained within. Eli’s life among the Comanche is absolutely riveting and researched down to the tiniest detail; I would not be surprised if Philipp Meyer could tell me how many eyelashes one of the Comanche’s horses had. An early scene, where Eli’s family waits through an afternoon and evening for the inevitable Comanche raid they know will come, feels like The Last Supper meets The Red Wedding. There’s enough dread and terror in those pages to make your blood run cold. And yet you will eventually come to care for the perpetrators of this violence, which is one of Meyer’s writerly gifts and also one of the statements he is making about the ever-shifting landscape of a place like the American West.

Other chapters are narrated by Eli’s son, Peter, a reluctant land baron, and by his granddaughter Jeannie, who must adapt in her own unique way when her husband’s untimely death throws her to the head of the family business and fortune. I think Meyer writes terrific female characters (Lee, in American Rust, was likewise well-done, and some aspects of her character feel like an early sketch of Jeannie). As for Jeannie, she’s a feat: strong-willed, human, believable. She knows that, to keep her family’s empire and legacy alive, she must cut away all the parts of herself that are remotely soft and feminine (without, of course, becoming ‘butch,’ which also wouldn’t play well with her crowd). The cost of this success is her children, and though she can see at times what has gone wrong, she is also frustrated and perplexed by the chasm between herself and her family.This honesty is something I’ve always appreciated about Meyer’s writing: the cost of everything is laid out in no uncertain terms, and everyone is both running from something and paying for something. Fate and chance will pull their strings, but actions are stronger than either. By the time you reach the closing line, which is so well-done that it remains one of my favorite last-lines of all the books I can remember, this philosophy — and the story — will feel so marvelously complete that you won’t wish to change a thing.

— The Girls from Corona del Mar by Rufi Thorpe

Here’s a change of pace from the high testosterone of The Son, but don’t let the title (or cover) fool you: Rufi Thorpe’s first novel is not some frothy, girly beach book. It’s a serious, thoughtful, and wonderfully-written debut about the way we know (or don’t know) the people closest to us. 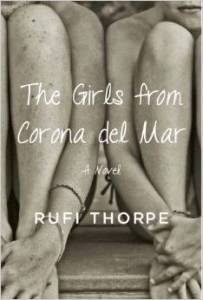 Mia and Lorrie Ann have grown up together in the small, gritty SoCal hamlet of Corona del Mar, and Mia has always envied Lorrie’s grace and kindness — a core goodness that seems to be the hallmark of Lorrie’s personality. Her family is, so far as Mia can tell, close-knit and loving. Why, then, does one tragedy after another befall Lorrie (we’re talking real tragedies: the death of her father, the birth of a severely disabled child) while Mia is able to skip through life scot-free?

Mia is troubled by the unfairness of these events, and strives to get to know Lorrie better even as Lorrie seems to be slipping through the cracks. Is it possible that even she, Lorrie’s best friend since childhood, knows very little of the person she holds most dear?

Thorpe’s writing is incredibly smart and tender without being flowery. By the time I was halfway into the novel I could tell this book was inspired, that this was the work of a novelist firing on all cylinders. Highly recommended for anyone on your list interested in philosophy, motherhood, and/or female friendship. Or just give a copy to the same person for whom you bought The Son, just to balance things out. Some of the same themes — choices and consequences, sacrificing oneself or sacrificing another — traverse both books, making them a fascinating pairing, like, you know, the best holiday wine and cheese, but for your brain.