Through this straightforward narrative (begun as an e-mail to me), I think my dad captures a lot of the turmoil and the national pain suffered during the Vietnam War, the way it crystallized young mens’ decisions, and the legacy that war has left us here half a century later. Thanks, Dad, for writing this.  — Andria

The year after high school, one of my childhood friends, David Fielding, was killed by a sniper in Vietnam. Shortly after that, another friend of mine from Boy Scouts, Bobby Uyesaka, was killed in Vietnam. I remember David’s mom pleading on the phone with my mom to never let me join the military, then going to David’s funeral a couple weeks later. I went away to college the following year, in part to have a student deferment from the draft. I must say the draft, in time of war, really forces you to take a hard look at your values as well as what is going on in our government both politically and morally.

To be granted conscientious objector status, one had to apply for a hearing at the local draft board. The criteria was that you had to prove that you had a history of strong belief in non-violence, and that it was against your belief to kill another person, even in war, with the exception that you could do whatever you had to to protect your family or self if you were under attack on home soil. Your case was helped considerably if you were a long time attending member of a pacifist church like the Quaker Church.

In the late 60’s, the U.S. was being torn apart by the intense emotions surrounding our involvement in Vietnam. Every day on the news there were body counts of Americans killed, and many more Vietnamese. Why were we there? To keep Vietnam from becoming Communist, leading to “the domino effect” and collapse of the free world? The war eventually was looking to be one that could not be won despite more and more Americans being sent, more B-52 bombings, more agent orange defoliation, and eventually the loss of 56,000 American lives and far more Vietnamese lives.

Personally, I was conflicted. I truly felt that I could not kill another human who was not a direct and lethal threat to me or my family. I also felt that I did not want to die for a war that was a disastrous mistake. I questioned myself. Was I just chicken and ducking out of something that less privileged youth couldn’t avoid? I knew, though, that I was not going to be a part of this war, whatever it took. I had even seen a sympathetic orthodontist who said he could put braces on my teeth, which was enough to avoid the draft. In the meantime, as graduation from college approached, I was ordered to report for my physical, in preparation for being conscripted.

About this time, I was granted a hearing before my draft board in Santa Barbara to see if I could be classified conscientious objector. You were allowed to bring a witness to testify as to your character and to substantiate your claims. I chose to bring my father. Dad was a WWII vet, a member of the American Legion, and one to run the flag up every morning. (This is a detail I remember vividly because when, throughout our childhoods, we visited my Grandpa Williams, we grandkids were always treated to some special time with my grandpa when we’d go outside in the evening and help him pull the flag down by its rope and pulley. He’d unclip it from the rope. Then we’d hold one end, he’d hold the other, and he’d walk toward you while folding the flag into a perfect triangle and tuck it inside a wooden box until the next morning, when he would take it out and raise it up again. To my knowledge, he did this every day of his life, and I can still remember the feel of walking out to the front of the house with him, hearing the music playing on his garage radio, seeing whatever piano he was working on in the garage [he was a piano tuner/repairman, having earned his degree on the GI bill, and the license plate on his red truck read, “ITUN4U”]; he was quiet and pleasant as we’d pull the flag down, smiling his dimpled smile [he was tall, had a head of handsome silver hair and looked a bit like Andrew Jackson].– Your Nostalgic Editor)

[My dad] told me that whatever I did, “Do not leave the country!”

In the previous year I had read a book by William J. Lederer titled Our Own Worst Enemy published in 1968. Lederer was a 1936 US Naval Academy graduate, and a junior officer on a river gunboat that patrolled the Yangtze River. This book was a first hand account of the incredible corruption by the higher ups, and the senseless risk to young American lives ordered to go on patrol. I told my Dad that I thought he should read it, and to my amazement, he did. Even he was now questioning what we were doing in Vietnam.

Back to the draft board. I went before the members of the board, and very nervously explained why I was a conscientious objector. I had a love for all living things, I was a patriotic Boy Scout, I went to the Methodist Church with my family through childhood, and I could not take part in the military that killed people on foreign soil who were not a threat to Americans. I told the board that I had brought a witness to testify, but they refused to hear him. One of the high points of my relationship with my father is when he came to the draft board with me, prepared to testify to my character. As predicted by my draft counselor (a Cal Poly college professor), I was immediately sent my 1-A notice, the classification for imminent draft. I had one last hope, though, and it was an appeal to explain why I thought my draft board was in error. Appeals had about a one in fifty chance of overruling the draft board. My appeal was successful, mainly on the grounds that the board had refused to hear my witness.

Now that I was 1-Y, conscientious objector status, I would be doing a two-year service for my country. I could wait for the draft board to find me a job, or find one myself that met its criteria. The jobs could be ones such as folding towels at the YMCA [Dad! Jesus! Why did you not choose folding towels at the YMCA??! — Editor], doing custodial care at institutions, conservation work, or working with the very old or young. I took matters into my own hands and did two years work as a Psych Tech at the nearby Atascadero State Hospital. Because the hospital had a need for new personnel (not many liked the working conditions), I was allowed to serve there. Work at the hospital was no picnic, as it housed a fifty-fifty mix of the criminally insane and mentally disordered sex offenders. The setting was maximum security prison, but unlike prisons, there were no armed guards, weapons, or mace. Ironically, I found myself in a violent setting having to do take-downs, and enduring Sunday punches out of the blue. My ward charge, a Vietnam vet, once told me, “Don’t let anybody tell you that you didn’t serve your country.” Jerry Randall, I will always appreciate you for that comment. I survived my two years of CO duty, and the draft was ended the same year in 1973.

The whole war was a cloud hanging over everyone, especially those of draft age. So many lives were interrupted and altered by the events of the time. For me, I didn’t go to work as a microbiologist after graduation; instead, I began a career in teaching. I came through just fine. While a psych tech at Atascadero, I used part of my time doing adult ed with the patients, and enjoyed this role. This eventually led to working with adolescents at Napa State Hospital, getting degrees in teaching, and going to the public school system for 22 years at Napa High. 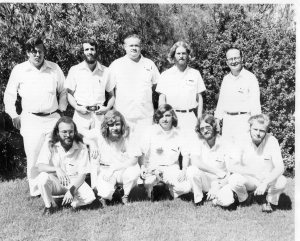 my dad is second from the right, standing row. Not visible here: the blazing red of his hair, a legacy shared by my two daughters.

I attached a picture of my Atascadero State Hospital psych tech trainee class. Can you pick out which five of us were conscientious objectors?

Editor’s note: As a kid raised by antiwar parents and a C.O. Dad, I remember hearing this song many times on vinyl. I was later able to sing it for a 7th grade history class, and was told politely by the teacher that it was not quite appropriate, though I personally thought it captured the feeling of the age and enriched our discussion.

In any case, now as a military spouse, I make no bones about it: peaceful protestors are as American as soldiers. America is free speech. America is protest.

And this song is catchy.

9 thoughts on ““A Cloud Hanging Over Everyone”: My Dad Writes in About His C.O. Experience During Vietnam”