Well, here it is almost Veteran’s Day, the most immediate significance of which is that it’s my beautiful mother’s birthday. Happy Birthday, Mom! 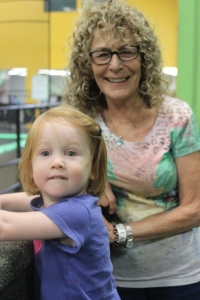 Like many people, I’ve always felt an ambivalence toward military-themed holidays — I appreciate them, but they often just highlight their own inadequacy or fail to strike a balance between heavy-handed patriotism and (particularly now with the supreme venting mechanisms of social media) far-leftist disgust. In a more personal vein, they might churn up my usual feelings about being a military spouse who was raised in a basically pacifist family. My dad was a conscientious objector during the Vietnam War. His father was a WWII veteran. It could not have been too easy for either of them. When I was in high school, I remember my dad telling me about how he tried to convince my grandpa that he didn’t want to go to war. My grandpa, an old-school kind of guy from West Virginia, did not support my dad’s resistance. They did not have any particular religious background to claim lifelong pacifism, and the only grounds my dad could use to qualify as a C.O. were for someone in his family to vouch that he had always had a conscience that would put him at odds with going to war. When my dad asked my grandpa to vouch for him in court, my grandpa refused.

So, as my dad tells it, he showed up for court alone. When it was his turn, he saw a door open at the back of the room and in my slipped my grandpa, who couldn’t go through with his own hard-hearted protest. My grandpa did testify on my dad’s behalf, and my dad was granted C.O. status. He served out his time working as a psych-tech in a mental hospital that housed some of California’s most troubling individuals — people who could not be trusted with pencils, or dental floss. He was attacked by patients more than once. When his service was up, the Marine who processed his paperwork told him that he had served his time as well as most people who had gone out of the country to do so.

That’s my dad’s story, not mine, so I can’t speak definitively to any of it (and I hope I am telling it right), but it always informed my thoughts about service and what it means. In recent weeks I’ve returned to some old poems and stories I read years ago, feeling around for whatever moments of clarity they once gave me, and they didn’t disappoint. I have no real way to gather them around the theme of Veteran’s Day other than to say that they meant something for me, and if you like you can read them and see if they do the same for you.
—–

Here’s part of a long(ish) poem that makes me think about the obligation of writers in a difficult world.

From “Diving into the Wreck” by Adrienne Rich

…I came to explore the wreck.
The words are purposes.
The words are maps.
I came to see the damage that was done
and the treasures that prevail.
I stroke the beam of my lamp
slowly along the flank
of something more permanent
than fish or weed

the thing I came for:
the wreck and not the story of the wreck
the thing itself and not the myth
the drowned face always staring
toward the sun
the evidence of damage
worn by salt and sway into this threadbare beauty
the ribs of the disaster
curving their assertion
among the tentative haunters.

This is the place.
And I am here, the mermaid whose dark hair
streams black, the merman in his armored body.
We circle silently
about the wreck
we dive into the hold.
I am she: I am he

whose drowned face sleeps with open eyes
whose breasts still bear the stress
whose silver, copper, vermeil cargo lies
obscurely inside barrels
half-wedged and left to rot
we are the half-destroyed instruments
that once held to a course
the water-eaten log
the fouled compass

We are, I am, you are
by cowardice or courage
the one who find our way
back to this scene
carrying a knife, a camera
a book of myths
in which
our names do not appear.

My black face fades,
hiding inside the black granite.
I said I wouldn’t,
dammit: No tears.
I’m stone. I’m flesh.
My clouded reflection eyes me
like a bird of prey, the profile of night
slanted against morning. I turn
this way–the stone lets me go.
I turn that way–I’m inside
the Vietnam Veterans Memorial
again, depending on the light
to make a difference.
I go down the 58,022 names,
half-expecting to find
my own in letters like smoke.
I touch the name Andrew Johnson;
I see the booby trap’s white flash.
Names shimmer on a woman’s blouse
but when she walks away
the names stay on the wall.
Brushstrokes flash, a red bird’s
wings cutting across my stare.
The sky. A plane in the sky.
A white vet’s image floats
closer to me, then his pale eyes
look through mine. I’m a window.
He’s lost his right arm
inside the stone. In the black mirror
a woman’s trying to erase names:
No, she’s brushing a boy’s hair.

I was lucky enough to get to sit across from a table many years ago and hear Yusef Komunyakaa read his poetry, in a small workshop class at the University of Minnesota. He and fellow poet Heather McHugh were visiting, and there was an amazing fruit tray that the Creative Writing Department had sprung for for the occasion, and all that was required of us was to sit and hear beautiful words and eat amazingly-fresh-for-Minnesota tropical fruit. Those were the sorts of opportunities I once routinely had! I haven’t had the pleasure of being among a group of writers in over a decade, but I’m hoping that will gradually change a little as circumstances permit.

Now, for the opposite of Komunyakaa’s poem, or, as I’m thinking of it, “Don’t Stop on My Account”:

“Dead when they picked him up,” said Godber’s man with relish. “They were taking the body home as I come up here.” And he said to the cook, “He’s left a wife and five little ones.”

“Jose, come here.” Laura caught hold of her sister’s sleeve and dragged her through the kitchen to the other side of the green baize door. There she paused and leaned against it. “Jose!” she said, horrified, “however are we going to stop everything?”

“Stop everything, Laura!” cried Jose in astonishment. “What do you mean?”

“Stop the garden-party, of course.” Why did Jose pretend?

But Jose was still more amazed. “Stop the garden-party? My dear Laura, don’t be so absurd. Of course we can’t do anything of the kind. Nobody expects us to. Don’t be so extravagant.”

“But we can’t possibly have a garden-party with a man dead just outside the front gate.”
——

I would not be surprised if this song, “Youth Knows No Pain” by the Swedish singer Lykke Li, were soon used in a war movie. The high-adrenaline beat, the loaded lyrics, the sightly blurred sound — I can see it in a heavily stylized film, a “Jarhead”-type piece where the images it’s played against suggest that youth indeed have known plenty of pain.


(The song is what I’m after here, so forgive the slightly distracting video, which gives the impression that the world’s moodiest dinner party is about to end very badly, perhaps in a game of stoner Clue where one of the band members is found lifeless in the parlor, beside a candelabra — I’m betting on the piano player, who looks as if he is about to burst into tears. He knows he’ll be the first to go. Anyway, now that I’ve called all this to your attention, please ignore it and focus on the song, if you care to. Because I think what the song is saying, at least to me, is important. Spending a few minutes at the Wounded Warrior Project web site made it clear to me that youth has known plenty of pain; I thought of sharing a few of their images here but somehow, given the ease of my own life, it made me feel cheap. I invite anybody to check out their organization, however.)

And now, there’s no one better to end a Veteran’s Day post with than that most beautiful chronicler  of the Civil War, Walt Whitman.

Nearly a decade ago, when we were stationed in Virginia, I attended a morning small-group church meeting with a good friend. Everyone was very nice, but it was more conservative and evangelical than I was accustomed to. As an ice-breaker, we were asked to go around the room and name one famous person we would like to have lunch with. Several of the responses were, “George W. Bush” (president at the time), and [televangelist] Beth Moore — responses that were met with murmurs of affirmation.

At any rate, it was my first time at the group, and when it was my turn to answer who I’d like to have lunch with I froze for several seconds and then blurted, “Walt Whitman.”

The kind ladies in the group went silent. I could see the chirpy group-leader trying to think of something positive to say. I couldn’t tell if they perhaps didn’t remember who Walt Whitman was, or if they knew and were horrified. My friend, trying to come to my aid, explained, “She’s from Berkeley,” and the group leader, unsure of what to say to that, finally settled for a cordial, “Well, welcome, Andria.” I mumbled my thanks, though I felt like a little bit of a freak, and when I went home and related this to Dave he sighed in sympathy and said, “You could have faked it just a little bit, for once.” But I couldn’t have. I’ll never disown you, Walt.

How solemn as one by one,
As the ranks returning worn and sweaty, as the men file by where
stand,
As the faces the masks appear, as I glance at the faces studying the
masks,
(As I glance upward out of this page studying you, dear friend,
whoever you are,)
How solemn the thought of my whispering soul to each in the ranks,
and to you,
I see behind each mask that wonder a kindred soul,
O the bullet could never kill what you really are, dear friend,
Nor the bayonet stab what you really are;
The soul! yourself I see, great as any, good as the best,
Waiting secure and content, which the bullet could never kill,
Nor the bayonet stab, O friend.

5 thoughts on “yourself I see, great as any”