I recently watched a Q& A with Malcolm Gladwell, author of The Tipping Point, about his thoughts on social media and other various topics. Toward the end of the video, the interviewer, Michael Lewis, coined the phrase “The Gladwell Effect” — after a conversation with Gladwell, he now viewed the topics they’d discussed differently. 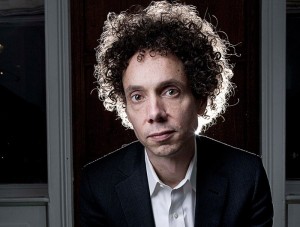 Well, I, too, have encountered the Gladwell effect, and I now understand why his writings are extremely popular. Gladwell has a fascinating way of conveying complex topics into very simplistic terms. Regardless if you agree with his point of view or not, he succeeds in getting a conversation started – to get you thinking, and that is what matters in the end.

Like a good reader, I started with the first book he wrote, the full title of which is The Tipping Point: How Little Things Can Make a Big Difference. When I first saw the title, I thought, That’s very wordy – what does it mean exactly? 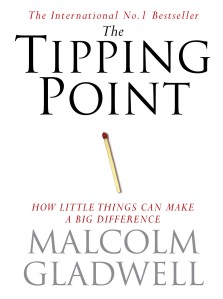 Well, what Gladwell masterfully does is theorize about how social influences (people, places, things) and behavior have primarily dictated how we live our lives. What caused [insert a phenomenon here] to be such a “BIG” deal? (Justin Bieber, for example: the kid came out of nowhere and became a huge star! Or a simple product like coconut oil: how did it shift from something used by a small number of health-conscious individuals, to its current mass-market reputation as a miracle oil?

It’s all about the small things becoming BIG things. Is it because the “right” person sees or hears a song, a play or movie, a fashion trend and then it becomes a BIG deal? Partly, but that’s not the whole story.

There are people Gladwell calls “market mavens.” Mavens are everyday people who we typically go to when we are seeking advice about random bits of information. They are “information brokers, sharing and trading what they know – they are not persuaders.” One such maven, for example, is Mark Alpert, a man who reads Consumer Reports for fun but will also write to Consumer Reports if he finds that something reported is incorrect. After reading about Mark, I thought to myself, I’d like him with me if I go car shopping.

A social phenomenon, as Gladwell tells it, builds from one person to the next and then it multiplies and BOOM! Then it’s all the rage. The maven is simply sharing the information he or she has learned. You don’t have to do anything with it. But most of us do — we tell other people about the new information we’ve learned and that’s where the tipping point happens. It’s a collective movement among people with similar interests.

Another, early example: the explosion of sales from Wolverine, the company who make Hushpuppies. It’s a classic example of the wild success of a product by word-of-mouth. A few kids in a chic part of New York began wearing the shoes, shoes they purchased from second-hand stores. A popular fashion designer (Isaac Mizrahi) saw the “kids” and wondered where they purchased the shoes from. He called Wolverine so he could place an order and add them to his fashion show. That single phone call was made by a BIG somebody and then multiplied to a dozen phone calls by other BIG name designers, such as Anna Sui and John Bartlett.

All this success was simply because of few kids who were trying to be different by shopping at second hand stores, maybe because of limited budgets. Without knowing it, they simultaneously began a huge fashion trend.

Throughout the book, Gladwell effortlessly shares a wide variety of stories – from how infectious agents such as syphilis increased due to the heavy use of crack cocaine, to an uptick suicides in Micronesia due to trivial or embarrassing reasons (such as seeing a boyfriend with another girl, or getting caught in an extra-marital affair). Social epidemics, he claims, have the same effect as health epidemics.

Gladwell explains things in a simplistic way, which makes you wonder, “Why hadn’t I thought of that before?” If you’re in the mood to learn new tidbits about life and gain a new perspective on social phenomena, this is your book. If social phenomena and random bits of information aren’t your thing, read The Tipping Point anyway – you’ll learn something unexpected and you’ll gain a new perspective.

Read more about The Tipping Point and Malcolm Gladwell. (The Telegraph, in British fashion, calls him a “zany brainbox.” I can’t NOT hear that in a British accent. – Editor)

Pastaveia St. John served twelve years in the Air Force and now works for the Department of Homeland Security. She writes a funny and inspirational blog called Be Fearless. Check her out on You Tube (her videos are full of all kinds of great tips!) and follow her on Facebook and Instagram.

3 thoughts on “The Gladwell Effect: A Review of Malcolm Gladwell’s “The Tipping Point””