R.H. Ramsey is an Air Force wife currently stationed in Kansas,  a mother of two, and the author of several books, including her most recent, Like Shards of Glass, from the indie publisher Inknbeans Press. “I always knew that I had a passion for storytelling,” she writes in an article in NextGen MilSpouse (“Find Your Peace, Find Your Balance”). “One afternoon, I sat down at our computer, turned on some music, and that year — 2005 — I completed my first novel… I realized that writing and storytelling are the essence of me. …Eight years and two children later, I have learned that taking the time to do something that I enjoy, the sense of completion, writing something that could potentially touch someone’s life, became my driving force. I am learning to balance the military lifestyle, marriage, the demands of parenthood, my insecurities, writing, keeping up with my websites, and school.”

Ramsey was kind enough to take the time to answer some questions for me. I loved her thoughtful, in-depth answers, particularly her take on writing and reading fiction as an empathetic act: “I put myself in [my character Monroe’s] shoes, and let my heart break with hers; I think that’s the only way to care for others, and to evolve, and create a deeper level of understanding for people we know, or have never met.”

1. MilSpouse Book review: Can you tell me a little bit about yourself — where you’re from, how you became a military spouse, and what your experience has been like so far? 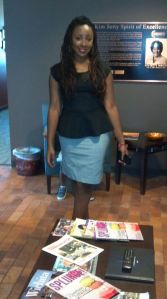 R.H. Ramsey: I’m from Oklahoma, and this is where I met my husband. At the time, we were in a the Delayed Entry Program, preparing to go into the Air Force. Months or weeks before he went to basic training, my then-future husband and I began thinking ahead: What if I become pregnant? What if we are both deployed? What, then? We thought hard, prayed about it, and decided at the last minute that he would go ahead into the military, and I wouldn’t.

There are positives and negatives with this lifestyle. I appreciate being able to see new places and travel. But it does concern me, moving around and interrupting my children’s friendships. It can be a little lonely, being far from family and friends. (The few friends I have, LOL!) But as a family, you might pull together and form a tighter bond and become very independent.

So far, we have been stationed in Abilene, TX, Lubbock, TX, McGuire in New Jersey, and Wichita, KS.

2.  When did you start writing? Have you connected with other military spouses who write?

I started writing when I was a sophomore in high school. Just sort of playing around, a lot of dialogue, and puppy love. I don’t know where it is, but I didn’t take it seriously at that time. A few years later, I sat down and started writing, and shocked myself – I finished the book. I think it was a murder-mystery, sort of like the movie, Double Jeopardy with Ashley Judd. (I was nineteen or twenty years old, and although I was proud of myself, I swore I’d never share it with anyone or publish it – or anything I wrote.)

Let’s see, other military spouses. Well, I’m loving meeting other authors, and sharing quirks and dreams, giving and taking advice. I have connected with men and women who were in the military, but I only know of a couple military spouses who are authors. 😦

3. Are there any ways in which being a military spouse has informed what you read and write?

The topics I write about are never light and fluffy and pretty. I think that, even as a child, my imagination went to darker places, my heart went out to people who seemed sad, and I always appreciated substance. That said, no matter my lifestyle, I would be writing about the tough stuff. Awareness through art, letting people know they are not alone in their struggles, making it clear that no matter what, they do have something to relate to.

4. Like Shards of Glass deals with several very deep themes: depression, addiction, abuse, sexual obsession. Are these themes you’ve dealt with in other books and stories? How do you approach research? Where do you get the ideas for your stories? (I wouldn’t be surprised if you had some kind of background in psychology!…)

Great question. The ideas strike at the most random moments! They’re constant, all of the time. For instance, when I wrote Just Beneath the Surface, around the time I wrote my first novel, I had this emotion built up inside, about the way people spoke about domestic abuse. Many times, throughout the book, you’ll hear the main character, Kendall, saying that she never thought she would be in the situation. She says that in the past, she and her girlfriends would sit around talking about what they would do: Hit back, attack with the nearest lamp or whatever they could get their hands on. But it’s not so simple, and it’s unfair to judge. Unfair to call a woman/man stupid for staying, when you have no idea how much work an abuser puts into nearly brainwashing someone to keep them from leaving or having a voice.

In Landon’s Story, I wanted to show how insidious emotional abuse could be, from the abuser’s point of view. He, Landon, couldn’t even see the monster that he was; he believed he was controlling his world to make others better. The reader sees how easy it is to empathize with someone who has had a horrifying past, seems neat and well put together, but slowly devours the woman he loves. He never hits her. He spoils her. Women love him. Men want to be him. He’s wealthy. He is a mastermind with words and actions. He always finds a way to bring her down, and make her think, He’s trying to help me; he’s right.

Originally, Like Shards of Glass was meant to be a short story, which was inspired by a book I wrote in 2010 or 2011. The novel (from 2010-2011) was about several different types of addiction, and at the core, it was a love triangle. Although I have written about physical abuse in Just Beneath the Surface, and emotional abuse in Just Beneath the Surface: Landon’s Story, I wanted to shed light on more little-known types of abuse — more like, we may not feel the effects until we are resentful and possibly suffering from long-term effects. Gaslighting, intimidation, stonewalling, manipulating others into staying away …

These are the behaviors Monroe’s first husband exhibited, and after years of keeping such a brave face, pretending to be strong, acting unfazed, she’s more fragile than she realizes. Without her knowing it, her world is upside down before Carter (her husband) destroys what’s left of her. This is what emotional abuse does. It tears you apart from the inside out, where no one can see. It’s a gradual thing, that you become numb to, and over time, you look back, you look in the mirror, and you don’t recognize you, and sometimes, you don’t trust anyone around you. It’s like being re-wired and re-programmed, and you spend the next several months or years, resentful of yourself for “allowing” yourself to change and grow so bitter or cold or however you’ve been affected.

This is where you met Monroe. A strong-willed, successful, stoic woman, whose husband has weaved his way into her mind, body and spirit; add to this a layer of grief, heartbreak, and misery, as he’s torn her heart right out of her chest. She’s a ghost, now.

I’ve spent the past decade reading and watching documentaries. And when I create a character, and put him/her into a story, I want it to feel real and raw. Because I know in my heart, that it is someone’s story. Someone who, at one point or another, thought he/she was alone, no one would understand, it’d be impossible to explain. 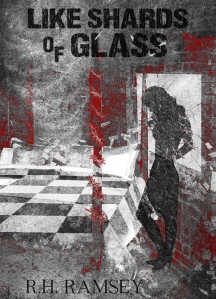 5. Your character, Monroe Song, is a troubled — no, devastated — woman. She’s suffered from an abusive relationship and a husband who’s committed an unspeakable act which resulted in the loss of three of her sons. Yet she is a strong woman in many ways, and she enacts an undeniable pull on the other characters. How did you come to create a character like Monroe?

Monroe is quite a force. She’s admired by some, loved by many, hard on herself, lost, driven, and addicted to pain. As far as creating her, it wasn’t that I sat down and wrote out what she would be, or how she would behave. I put myself in her shoes, and let my heart break with hers; I think that’s the only way to care for others, and to evolve, and create a deeper level of understanding for people we know, or have never met.

She is someone any woman could be. I wanted her conflict to be felt, seen, heard, from her first to final chapter, and long after. I believe empathizing with someone who’s strong one minute, and falling into addiction the next, grieving one minute, and running a business the next, is keeping the invisible line in the sand from being drawn. The line of standing on that side where contentment and being a know-it-all, keeps us from reaching out or connecting with someone who’s unlike us. No, we’re all pretty much the same, and if we’re not affected directly by depression or grief or abuse or addiction, we are affected indirectly, and that in itself should be enough of a reason to care.

3 thoughts on ““When I create a character, I want it to feel real and raw”: an interview with R.H. Ramsey”