Stephanie Carroll’s A White Room opens with the kind of dilemma that makes good fiction. It’s the year 1900 in St. Louis, Missouri, and twenty-three-year-old Emeline Evans is confiding to her younger sisters that she wants to do something unexpected: instead of looking for a good man to marry, she plans to go to nursing school. She has no idea that a sad event will soon make this dream impossible. Her father has fallen gravely ill, and soon after, he passes away. It’s only then that Emeline’s family learns how destitute they actually are. Without her father, Emeline and her three sisters, brother, and mother are left high and dry.

Selflessly, Emeline does something rash: she travels to the home of wealthier neighbors, the Dorrs, and proposes that she marry their bachelor son, John. The Dorrs are indebted to Emeline’s family because her father (who was a lawyer) helped them start their law practice, so, though it seems quite incredible, they consider the proposal and then say yes, Emeline and John will be married. It seems an arrangement that heavily favors the Evanses, all six of whom will now be supported by the Dorrs, but I was able to go along with this and believe that perhaps their son had gone unmarried long enough in their eyes, and that their gratitude toward Emeline’s father was great enough that they really did make this surprising bargain.

At any rate, the deal is a bad one for Emeline, because not only is John Dorr a cold fish to the extreme, but he takes a job in the confining, unhappy town of Labellum, Missouri (which appears to be a fictional town, and is the same word, rather ominously, for an insect’s mouthparts). (As a side note, I found it interesting, and a little humorous, that Carroll began writing A White Room while she and her husband were living at the notoriously small duty station of Fallon, Nevada — a place she, unlike Emeline in Labellum, eventually grew fond of).

John Dorr selects the world’s creepiest home for his and Emeline’s newlywed abode: a twisting, weirdly decorated, hidden-stairs-filled “architectural wonder” (as guests politely exclaim). He seems to love the house and likes to keep the lights mostly out to save oil. Then he goes off to work, leaving Emeline with nothing but her anguished thoughts, her stunned realization that she made this choice that’s causing her life to unravel.

The details of the horrid home are rather riveting and definitely creative (Carroll cites Victorian Art Nouveau, “with its scrolling and winding designs,” as inspiration: “The designers incorporated either a life form or a suggestion of movement into every piece, so the objects practically look as though they are coming to life already”).  I’d love to see the movie set:

One [chair had] ghostly hands drifting up, like smoke, one with two green bug-eyed pads on the back, and one with three overlapped leaves for a seat. Another had thick layered waves that resembled muscles I’d seen in books but not those of a human — some other creature. The muscles of a chair?

As the days pass, Emeline’s mind begins to play tricks on her. She sees flashes in the mirror, is haunted by yellow eyes in the shrubs outside. It’s here that Carroll’s homage to Charlotte Perkins Gillman’s “The Yellow Wallpaper” becomes most evident. “The first thing in A White Room that people recognize as reminiscent of ‘The Yellow Wallpaper’ is the situation of a husband taking his wife to an isolated and disturbing country home and forcing her to rest as a form of treatment for hysteria,” Carroll has said in an interview with The Book Wheel. “I re-envisioned the element of something inanimate coming to life with the house and furniture.”

There is also a very distinctive mood created in “The Yellow Wallpaper.” It’s a sense of isolation, despair, unease, and mystery characteristic of a haunted house story, but with an uncertainty of whether or not the things the main character sees are ghosts or her own hallucinations. This was one of the most complicated things to recreate… The fact that it is not clear whether or not the house is haunted or if Emeline is seeing things is a reflection of that uncertainty in “The Yellow Wallpaper.”

Instead of succumbing to madness, as does the narrator of “The Yellow Wallpaper,” Emeline takes her newfound indifference to what society thinks and uses it to follow her own heart. Her interest in nursing, and the compassion she gained watching her father suffer in his final days, lead her to help those in the community who are being disregarded by traditional doctors: a man whose liver failure is dismissed as having come from alcoholism (though he and his wife swear he never drinks a drop), and, most controversially, women who have been thrown into despair over unwanted pregnancies. Carroll’s explanation of this narrative turn is quite scholarly and fascinating:

Taking the story into the underground world of unlicensed nursing and the professionalization of medicine was the biggest split from “The Yellow Wallpaper.” I went in that direction because I wanted Emeline to have the desire to seek out a profession. I wanted her to have a dream to go after once she was free to do as she pleased. I was attracted to the nursing profession because of the history of how doctors and authorities went after midwives and unlicensed nurses in a way comparable to the witch trials. 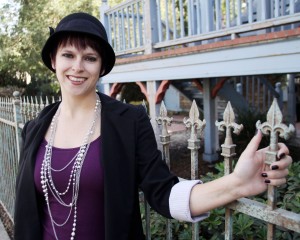 Emeline begins practicing her own brand of medicine even as her husband’s boss takes on a personal mission to prosecute midwives and unlicensed nurses. It’s a creative twist that fills the second half of the novel with narrative tension, adding dimension to John beyond what is given to the husband in “The Yellow Wallpaper,” because we see him put in a bind as well. Maybe he’s not the cruel captor he might initially have seemed, but by this point Emeline has even bigger matters to attend to.

The plot complexity, historical and literary allusions, and depth of character in A White Room impressed me from start to finish. Very quickly, I moved from thinking, “This was written by a Navy wife?!” to simply appreciating the novel on its own merits. The story becomes as darkly layered as the strange, weirdly inventive Victorian furniture that crowds Emeline’s home, and Carroll plays constantly with the idea that things are never as they first seem. Her attention to the process of adjustment, and to the adaptability of a female character in a tough spot, seems particularly apt subject matter for a military spouse — and then Carroll takes it all up a notch, telling a tense, dark, but in the end very human story.

You can order A White Room here and here. Also, see the full Book Wheel interview with Stephanie Carroll here, and check out her personal web site here.

She writes for a funny and informative blog called Unhinged and Empowered Navy Wives and Navy Girlfriends.

(“To our wives and girlfriends — may they never meet.” Classic dining-in toast, for you mil spouses out there.)