And we’re off! Dave’s been gone one week as of today. He left last Wednesday morning, early. I was sad to see him go, but also relieved that we could get this show on the road and get it over with sooner.

He reports that Guam is jungly and remote (they flew over 3,300 miles of nothing-but-ocean to get there from Hawaii). It’s hot and humid, and they get attacked by bizarrely aggressive crows on their PRT runs (one Marine jogs carrying a paddle so he can wave it over his head when he goes through one stand of trees). His first night, sitting in a small room with bare walls and one bunk, no family, no phone or TV or internet connection, I think he was kind of lonely, but they’ve gotten to work setting up their new EOD unit out there, and I think it’s pretty much like a 9-to-5 job in the jungle.

My 9-to-5 hasn’t changed! The kids and I are hanging in. We found our groove pretty fast. We’ve spent an inordinate amount of time downtown in the block that houses both the YMCA and the public library. Books, movies, and swimming: that’s us. I had one sad evening but otherwise I’ve been all business. It helps that I have revisions on a novel to slave over and various other projects (volunteering as a reader for Kore Press, leading my neighborhood book club this month, etc.). I put the kids to bed, and go right to the computer to do my work, and work until midnight or 1 a.m. Somewhere between 5 or 6 a.m. I hear the patter of little feet and a small voice right next to my ear: “Oh, good morning!” (That’s Zanny.) And then we start our day.

The house is pretty messy, I often leave dishes in the sink overnight and I have only done one load of laundry (had to dip into the “B Team” of underwear today, and that is no fun), but we’re trucking along. The only time that feels a little hard is Zanny’s naptime (which is a farce these days, but I keep trying) and the 6 p.m. time slot where my brain starts thinking Dave should be home soon, but then I recall that it’s just me around these parts. And weekends — weekends kinda suck. I got my nice dad to hang out with me this Saturday just so I wouldn’t feel lonely in our non-military neighborhood when all the families are out on walks together.

Hangin’ out at my dad’s house this past weekend

THIS is how you watch ’em.

In the absence of much news, I’ve decided to tell y’all a story.

I love stories! And this is a good one.

So, my dad has been told throughout his life that he looks like Robert Redford. I’ll let you be the judge: 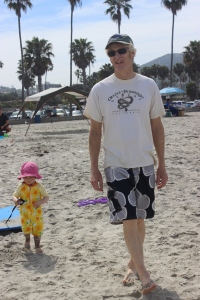 It’s true, my dad is a fit, ruggedly handsome man. He was a redhead in his youth and it’s faded to a nice, natural blond. If you don’t see the real Robert Redford every day, I can see how you might think my dad looked like The Sundance Kid. (And he’s told that he looks like Robert Redford with such regularity — often, actually mistaken for Robert Redford — that it has become a family joke.)

Last month, my dad went to visit some of our family in Ireland. He hadn’t gotten any farther than LAX when he noticed a woman slyly holding up her camera at waist-level and snapping pictures of him. It took him a few minutes to realize what she was doing, but then he suspected: she, like many before her, thought he was Robert Redford! Alas, she was proven wrong when he sat near her in a lowly coach seat, not the first-class befitting of a Hollywood legend.

My dad stayed with our family in beautiful Sligo, Ireland for a week or so — childhood home, and burial place, of W.B. Yeats, whose grave my family and I visited back when I was ten years old. (“Cast a cold eye on life, on death — horseman, pass by.”) 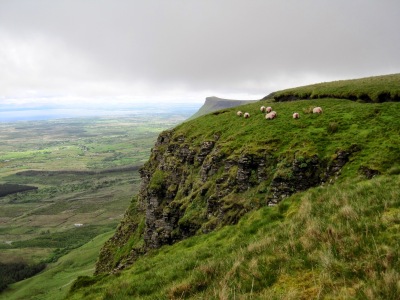 Dad and the family puttered around the region, hiking Benbulben, taking the rowboat out on the River Shannon, and so on. He also made a couple of trips to downtown Sligo, a town full of artisan shops.

While downtown, he visited a woodworker, Francis Presley, who’s known locally as “The Wickerman” for his wood and wicker creations. My dad, his partner Gail, and my uncle Paul all spent some time in The Wickerman’s shop, enjoying his wares.

photo by my dad – the Wickerman, Francis Presley, showing off a guitar-like instrument

They then proceeded down the street to this jewelry shop.

Gail liked one pendant in particular — a silver hare. My dad wanted to get it for her birthday the following week, without her knowing, so he could surprise her with it at home. So he purchased it but then sent my uncle Paul in the next day to pick it up secretly.

This detail is important, because a week or so later, my aunt Berta was downtown when she overheard someone mentioning that Robert Redford had been spotted in Sligo the previous week.

She overheard the person saying, “He bought a pendant from the jewelry store, but sent his minder in to pick it up for him the next day.”

Berta stifled a laugh — “Robert Redford” was my dad, and the “minder,” of course, was Uncle Paul!

She overheard another person mention that they, too, had seen Robert Redford about town.

Imagine Aunt Berta’s surprise when all this went a step further, and she opened the slim “Sligo Champion” at home to find the following story: 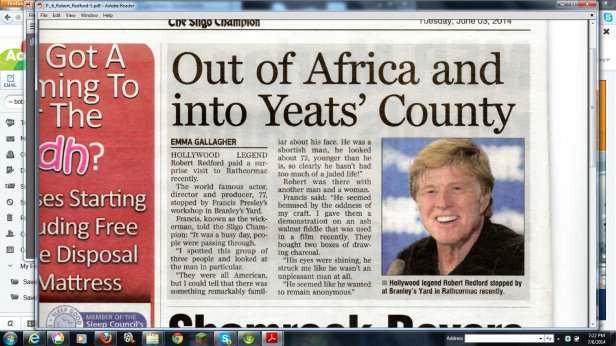 “Robert Redford…the world famous actor, director, and producer, 77, stopped by Francis Presley’s workshop in Branley’s Yard. … Francis, known as the wickerman, told the Sligo Champion: ‘It was a busy day, people were passing through. I spotted this group of three people and looked at the man in particular….I could tell that there was something remarkably familiar about his face. He was a shortish man, he looked about 72….he seemed bemused by the oddness of my craft. … He seemed like he wanted to remain anonymous.”

The story was accompanied by a stock photo of Robert Redford at a press conference. But my Aunt Berta knew immediately that this was her brother, mistaken yet again for Robert Redford. Every detail adds up, from the timeframe to the number of people there.

My favorite line, I must say, is this one: “His eyes were shining, he struck me like he wasn’t an unpleasant man at all.”

It’s true, my dad is a not- unpleasant man. And what a funny feeling this must have been for him! Who really ever gets to hear what strangers think of them upon a first impression — how they’re glimpsed from the outside? Well, now my dad knows. He is bemused, he has shining eyes, he looks unjaded….and he just wants to remain anonymous.

5 thoughts on “Horseman, Pass By: In Which We Survive Week One of Deployment and My Dad is Mistaken for Robert Redford”