Well, here we are, two days before Dave leaves. I wish I could say I’m full of wise thoughts to share, but really I’m mostly in a panic.

Susanna, our 2-year-old, who up until last week was a reliable little napper, suddenly decided to spend nap time teaching herself to climb out of her crib and running gleefully in and out of her bedroom. I really relied on her nap times to just get a grip on the day, clean up the dishes and have a quiet moment (sometimes even to get some writing done), but now I have to keep a constant ear out for her and make sure she’s not doing something dangerous —  because frankly, her common sense leaves a lot to be desired. 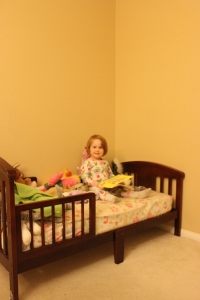 What? Sleepy time? No, I’m more in the mood for a sing-along, stories and some s’mores, thank you

She hasn’t napped once since learning to climb out of her crib. But she’s too young to stop napping, so she’s spent all afternoon crying and whining because she’s so tired. And she’s only one of the three kids! 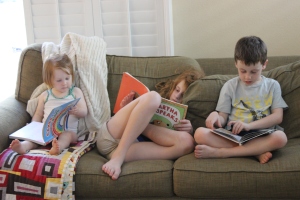 Luckily, all three of them spend every waking moment reading quietly together on the couch without bickering while I cross-stitch and listen to NPR

I’ll admit, I feel tired most of the time even when Dave comes home from work, so I’m not sure where the reserves are going to come from to get through the next six months, but I guess they’d better come from somewhere!

I feel a bit like I am preparing for some kind of really slow solo marathon, and that I need to save all my energy for it.

Logistics also scare me. Recently, I earned my first paycheck in nine years, and it was a great feeling, and I used part of it to buy plane tickets to Minnesota to visit family this summer. So, that was liberating. But then I thought about what I had just bought and I felt terrified. The sheer act of mobilizing three kids with car seats and clothes and snacks, getting us to the airport with documents in hand (by 6:30 a.m!), checking luggage, and then having them BEHAVE for 4 hours on a cross-country flight (twice!) seems like some kind of crazy gamble. (It’s really all Susanna, again. I can’t imagine her sitting still for four hours. She never has, yet. What makes me think she’s going to want to on a crowded plane?)

And then I tell myself: Williams, that flight is more than a month away. Stop psyching yourself out. Live in the moment, like those Dove “Promises” wrappers tell you to do!

(Then again, a Dove “Promise” once told me, “You look good in red!,” and I am a redHEAD, something the Dove “Promise” was obviously unaware of, because everyone knows redheads look awful in red. So, Dove, I don’t think I can trust you.)

Dove, you don’t know me.

All right, Dove, now you’re just being a jerk.

I know most people have had much bigger hardships than this in their lives — this is, relatively speaking, small potatoes. But it’s still a lot to adjust to. And not just for me — I think Dave is particularly going to miss Susanna, who’s still changing by the day. Every day she trots out some new, funny phrase or goofy habit, and dozens will have come and gone by the time he gets back. Dave’s been jumping to put her to bed every night,  even to change her diaper — he just wants to spend every second with her.

There’s been quite a bit written about the strain on marriages during a deployment and even after the service member returns home (Army Amy recently had some great thoughts on this topic), but what about the weird span of time leading up to deployment? Last time we did a full deployment, we had six days’ notice, it was wartime, it was all such a whirlwind that I hardly remember a thing. Well, the flip side was that it was a lot more romantic that way.

This time around, I’ve known about the deployment for four months — just long enough to put Dave through the world’s slowest, lowest-grade guilt trip for something that is not even his fault. I’m no angel. The sighs, the “Just-think-how-hard-it’ll-be-for-ME-in-two-months”-es — they’ve all been there.

The last few days, I just felt very dull. I didn’t really put out much wifely effort. Today, realizing time was running short, I knew I needed to step things up. I straightened my hair (God, what a pain that is), put on a “look-what-you’ll-be-missing, pal” dress and heeled shoes. (Let me clarify that in my case, “look-what-you’ll-be-missing, pal” devolves very quickly into a crabby housewife wearing a Cruella DeVille grimace, trying to wipe smeared avocado and grilled cheese strings from the fancy dress while she teeters in the unfamiliar heeled shoes, sloshing black coffee out of the mug she’s got her death grip on. In reality, “Average, Comfortable, Slightly Sweaty (for no good reason) Housewife” is probably the much more attainable look for me.) Also, when I dress up without warning I think it scares Dave. But all I meant this time was, Hey, I’m gonna miss you, so I’ll try not to look like a total slob while you’re still here.

Sometimes, everything just feels like a lot of work. But partway through the day today, I remembered the scene from the movie “Parenthood” (it is so worth watching. look, I found the clip for you) where Keanu Reeves crashes his little race car, and his pregnant fiancée Julie starts freaking out. When it’s revealed that 1989 Keanu will be okay (with his hilarious, “Did I win?” and cheezy wobble as he emerges from the car), Julie starts to back away, but her mom (played by Dianne Weist) grabs her by the shoulders to demand where she’s going. Julie shouts, “I can’t. This is too intense!” and her mother, who to this point in the film has mostly been everybody’s doormat, roars back, “This is MARRIAGE! Now, let’s get in the truck!”

And I just love that line. Even in such a funny movie, it has power. This is too much for me. I’m tired. But this is parenthood. This is marriage.

Now let’s get in the truck!

And what the heck, Dove chocolates — you should have put that in one of your little silver wrappers by now.

5 thoughts on “This is Marriage (Now, Let’s Get in the Truck)”