“Live your most authentic form of self,” Pastaveia St. John encourages readers in her popular blog, Be Fearless. After twelve years in the Air Force (getting out just last year), earning an MBA and holding onto a love of reading and natural health throughout all that time, she’s gotten this down to an art.

Pastaveia, an avid reader who volunteers at her local library (“because I’m a nerd and I want to give back to my community!,” she jokes) shares everything from good reads to health and beauty knowledge to daily affirmations on Be Fearless. (Stay tuned for her upcoming review of Chimamanda  Ngozi Adichie’s Americanah here on the Military Spouse Book Review.)

Over the last year, she’s also begun sharing her gradual process of reducing her family’s debt (much of it from student loans). She’s been able to cut their debt load nearly in half over the last 11 months, with the goal of becoming completely debt-free by May 2017. “Alright…here goes,” she wrote in October 2013 when she first began publicizing her debt-free journey. “I’ve decided (with consent from my spouse) to post our budget online for everyone and their mama to see…This is to be an inspiration to others who may be trying to eliminate their debt as well and manage their money better.”

Apparently, this was an inspiration to many people, as her blog has over 130 followers. I’m grateful to Pastaveia for answering a few of my questions about her military service, her outlook on life, and overcoming personal challenges.

1. Mil Spouse Review: Tell me a little bit about your childhood growing up.

Pastaveia St. John: Hmm, let me go deep into my mind-palace [Sherlock Holmes reference – BBC]. I grew up in northern Florida and being the oldest of five, my siblings and I were always creating our own games and exploring our imaginations. The local library was our hangout of choice in the summer and our babysitter after school. We would fantasize about what life would be like as adults, and in retrospect I’d like nothing more than to be ten again — so I can hang out in the library and read all day.

2. Mil Spouse Review: When did you decide to join the Air Force and why? Was it a surprise to anyone in your family?

Pastaveia: I toyed around with the idea of the military as a junior in high school because I thought it’d be easier than college (I was so naïve). It wasn’t until my father became ill during my senior year that I wholeheartedly considered it. He and I had a conversation about my future and I told him I wanted to see the world — he gave me his blessing. Sadly he passed away shortly after my graduation and I left for the Air Force the following month.

No one in my immediate family was surprised at all but my extended was shocked!

Pastaveia: Expressing confidence was a challenge for me as a person and that insecurity held me in fear during my first few years in the Air Force. After reading some good books, getting advice from people I trusted and ultimately trusting myself, I overcame that challenge. 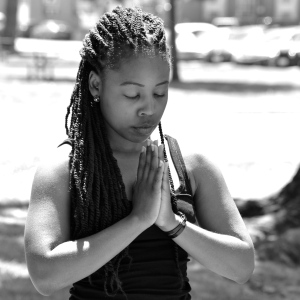 4. Mil Spouse Review: Do you have children? If so, how have you balanced personal goals and ambitions with motherhood?

Pastaveia: Not today but we’re hoping to expand our family in the near future.

I’ve watched my mother master the art of motherhood and personal ambitions and what I’ve learned from her that I, too, hope to accomplish is to say “no.” I think understanding that you can’t do everything and come to terms with [the fact that] control is an illusion — will take away the pressure to be superwoman. Simply do your best and leave the rest to God.

5. Mil Spouse Review: On “Be Fearless,” you’re very open and honest about financial goals and overcoming debt. What prompted you to be this honest, and have you received positive responses from your readers?

Pastaveia: I’m still surprised that my husband agreed to this. He’s usually my scapegoat — I’d be like: “Oh my husband wasn’t in agreement, so I can’t commit to [insert activity/course of action here].” Our readers are glad he agreed as well. They enjoy seeing the possibility of being debt-free from everyday people like us — we’re not trying to sell anything.

Honestly, the October 2013 government shutdown is what prompted the public postings of our financial situation. I spent twelve years in the Air Force (July 2001 – September 2013) and I thought the government was stable and secure in its business — wrong! I watched friends who had higher paying positions than mine complain about how they may not be able to make their mortgage payments or other bills because paychecks would be delayed.

I’m grateful to God that we didn’t have a situation where we’d be behind on bills if a paycheck was delayed, but the circumstance was a wake-up call. I realized that the money we put towards debt should be going towards savings — you know, in case the government shuts down and our income comes to a screeching halt.

It was in that moment I decided to do something about it — really do it this time. I read a few financial management (Dave Ramsey) books and put my overpriced MBA to use. I plan and forecast our finances and budget just like a business would, and it’s working!

6. Mil Spouse Review: Any advice for women starting out in the military?

Pastaveia: For young women entering, I give the same advice I gave to my sister (Air Force) and brother (Marines) when they joined and that is: “Don’t give anyone reason to throw salt on your name.” If you are polite, do your job with integrity and commitment — you’ll succeed and go far. No one can hold you back from your blessings.

Thank you so much for stopping by and answering some questions, Pastaveia!