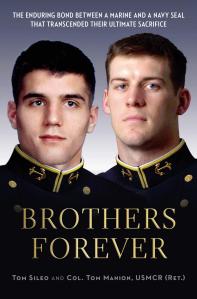 Travis Manion and Brendan Looney were a pair of fun-loving, athletic kids fresh out of high school when they entered the U.S. Naval Academy at Annapolis, Maryland in Fall 2000. Both from close-knit, Catholic families, they became best friends, running buddies, and honorary second sons in each others’ families. They shared a tenacious work ethic and a competitive streak founded on mutual respect. Manion went on to become an officer in the Marine Corps, known for his compassion toward local civilians as well as his dedication to the Corps, and was killed in action after saving two other Marines on the streets of Fallujah;  Looney became a well-respected Navy SEAL, perishing in a helicopter crash in the mountains of Afghanistan three years after the death of his best friend. Brothers, correspondents, and comforters to one another’s families throughout their ordeals, they are buried side-by-side at Arlington cemetery.

Travis’s father, Tom Manion (himself a retired Marine Corps Colonel) wrote Brothers Forever (along with Tom Sileo) to memorialize his two lost sons, and the book is obviously a labor of love. As you read you can feel the therapeutic value of the book to its author, and the bravery and pain inherent in its writing. I cannot imagine losing a son, let alone recounting his last moments (and the horrible weeks that followed) in painstaking detail. But I got the sense that the writing process was a beneficial one for Col. Manion, a way to share his memories, and his pride.

Brothers Forever is a useful book for readers not impacted daily by the tides of war. It’s a study of the families for whom world news and international politics have a daily bearing; families who listen closely to political debates and presidents’ speeches; who, as the author describes, cried upon learning of the capture of Osama bin Laden, not just from relief but because they knew people involved with his capture, or knew that their son/ husband, if still alive, would have been among them. Manion points out that only 1% of Americans now serve in our military, and that it is an all-volunteer force;  of that 1% , only a fraction have been impacted with such force as the Manions and the Looneys. Their sons volunteered not just for military service but for the most direct, front-lines brand of that service, making them both brave and vulnerable at the same time.

Travis and Brendan were at the Naval Academy during the events of 9/11. Like any other students away from home on that day, they sat glued to their lounge TV sets for updates, watching the horrific attack unfold. Yet it had a very particular meaning for them. The young men and women at military academies saw their futures crystallizing before their very eyes, knowing that they were on a direct path to war. (Jane Blair, author of the memoir Hesitation Kills, shared a similar experience; she was at basic training on Sept. 11th, putting her even closer to becoming an officer in a time of war. “About sixty Marines hovered around a television, watching and waiting,” she recalls.  “…We slowly realized that this was the day our training wheels came off. Our training would be practice for a war we would fight. The global war on terrorism was our war, and with every ambush and live-fire exercise we did, our real enemy was out there waiting for us.”)

Manion and Looney are more than up to the task of fighting this war, and their triumphs and struggles are explained in detail. What the U.S. asked of its young soldiers in the recent wars becomes blatantly clear, especially in the matter-of-fact retelling of a few days during Travis’s deployment to Fallujah. He survives a lung-burning chlorine bomb attack, vomiting  on the rooftop where he’s keeping watch; soon after, he witnesses the bombing and total destruction  of the makeshift base he’d been helping to build, and rescues two Iraqi civilians from the rubble. (These are painstaking, involved rescues.) Less than 24 hours later, the vehicle he’s traveling in is hit by an I.E.D. This is enough trauma to fill a lifetime, let alone a week or two in the life of a young twenty-something, and yet this is how life was for many of these men and women, over and over again.

The book does suffer some of the limitations of second-hand storytelling; the young mens’ conversations — few witnessed firsthand, and all reconstructed years later — are affectionate but vague, centering mainly around sports and basic trading of information like hometowns, siblings, and so on. They reflect the difficulty any parent would have in trying to imagine what their children say to their friends when they’re all just hanging around. Because of that, Brothers Forever  is also much “cleaner” than the vast majority of military books.

There’s also the issue of Col. Manion’s extreme closeness to his subject; his main emotion is of pride, and even his grief is described almost obliquely. (He is most effective when describing his wife Janet’s grief, how each time she recalled her son as a baby she would feel the pain of his loss all over again: “For a moment Janet was calm, until baby Travis’s face flashed through her mind. Each time she saw that enduring image, the agonizing spasms of pain would resume.” This was the first time in the book that I felt my eyes well up, imagining what that mother had gone through.)

Brothers Forever is a tribute, and as such it puts forth the best version of every person involved.  I can’t help but remember the words of writer Lorrie Moore, who’s said that you should write what you would not want to show your mother.  In contrast, Brothers Forever is the book you would read at her funeral.

That said, for readers with a strong love of country and an affinity for military history, Brothers Forever will be a moving book. It’s touching not just because of the two young men involved, but because of the legacy carried on by their families, who  have suffered loss of a tremendous scope. These families have made their pain into good and worked to keep their sons’ memories alive in positive ways.

This story deserves our attention and respect, because, despite some of the particularities of Looney’s and Manions’s situation, they were sadly not the only such sacrifices of their kind. 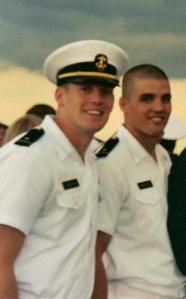 This photo breaks my heart, as it should.

Note: I was given an advance copy of the book to review.