If you’re looking for a good read on Mother’s Day, The Snow Child is a perfect choice.

That’s how I plan to spend the day, curled up on my sofa under the softest blanket I can find. I’ll crank up the air conditioner and read in my pajamas, imagining myself cozy in the log cabin that I used to own in the mountains beside Eagle River, Alaska.

Mother’s Day, in particular, is always hard for me, because I lost my mother and brother to the same disease when I was twenty-one. Eowyn Ivey’s language makes me forget for the moment that I’m motherless: “Through the window, the night air appeared dense, each snowflake slowed in its long, tumbling fall through the black.” It transports me to Alaska, a place I still call home even though I only lived there for seven years while my husband was with the U.S. Army Corps of Engineers.

Set in the 1920’s, the book opens in the voice of a childless woman haunted by the image of her stillborn baby. Nearly 50 years old, Mabel and Jack had moved from the East Coast to Alpine, Alaska, for a fresh start, hoping the life of a homesteader would ease their grief. “Here at the world’s edge, far from everything familiar and safe, they would build a new home in the wilderness and do it as partners, out from under the shadow of cultivated orchards and expectant generations.” However, Alaska is not what they expected. They never get to spend any time together. Jack refuses to allow her to join him in the fields and returns every day too tired to even talk. Mabel is lonely from the isolation and darkness of the winter, so lonely that one day, she decides to cross a treacherous point of the frozen Wolverine River in Alaska.

Even if you have never lost a child or felt like life was too hard to live, you can find something in common with Mabel. For me, it was this passage that made me fall in love with her: “All her life she had believed in something more, in the mystery that shape-shifted at the edge of her senses. It was the flutter of moth wings on glass and the promise of river nymphs in the dappled creek beds. It was the smell of oak trees on the summer evening she fell in love, and the way dawn threw itself across the cow pond and turned the water to light.”

Ivey subtly weaves in what critics call “attempts to sustain the possibilities of both magical realism and real, unmagical realism.” You’ll need to read the book and decide for yourself whether you think Faina is the snow child Mabel and Jack created (“frost … and snowflake … turned to flesh and bone”) or an eccentric orphan living off the land.

The chapters mostly alternate between Mabel and Jack’s point of view. While I wouldn’t have minded if Ivey stayed in Mabel’s point of view the entire length of the book, she does do an excellent job of capturing how Alaska challenges men. As my husband used to complain to me after insisting on plowing our extra-long and steep driveway or chinking the logs of our cabin all by himself, “It’s a lot of work for me, not you, to live in Alaska.”

To which on many occasions, I sounded just like Mabel: “Don’t you see? This was to be ours together, the successes and the failures.”

If nothing I’ve said so far has piqued your interest, then read this: “We never know what is going to happen, do we? Life is always throwing us this way and that. That’s where the adventure is. Not knowing where you’ll end up or how you’ll fare. It’s all a mystery, and when we say any different, we’re just lying to ourselves. Tell me, when have you felt most alive?”

This is what Mabel’s best friend says to make her feel better about the possibility of losing Faina. While some critics think that the “characters often speak as though they were narrating their own personal book trailers,” I find that every time I reread this book, it’s this passage that percolates in my consciousness.

When have I felt most alive?

Eowyn Ivey’s first novel, The Snow Child, was published in 2012 to international acclaim: a Pulitzer Prize finalist for fiction, 2013 Indies Choice award for debut fiction, 2012 UK National Book Award winner International Author of the Year, and 2013 Pacific Northwest Booksellers Award winner among many others. It has been published in more than 30 countries and two dozen languages.

Ivey’s own “Cinderella” story starts at a bookstore in Palmer, Alaska called Fireside Books. When Ivey was pregnant with her second child, she shelved a children’s book called The Snow Child, a Russian fairy tale called Snegurochka retold by Freya Littledale and illustrated by Alaskan artist Barbara Lavallee. The fairy tale resonated so strongly within her (especially when she thought her unborn child might have a rare genetic disorder) that she stopped writing a novel on which she had already spent five years.

While Ivey wrote The Snow Child, an hour or two each day after dinner, she also lost a friend to cancer. She channeled these fears and losses into her book. Three-quarters done, she attended the Kachemak Bay Writers’ Conference in 2008 with her mother, a poet, who signed her up for an agent meeting. The agent asked her for the first hundred pages. The next morning, he offered to represent her. (Note to writers: I highly recommend this conference. I attended the year before Ivey and the year before that, plus the year after Ivey, and each time had an agent request my manuscript too!)

On April 28, 2011, Ivey started her Letters from Alaska blog with salutations such as “Dear Brave Reader,” “Dear Goodhearted Reader,” or “Dear Sunny Reader.”  You can follow her exciting road to publication. One of my favorite posts is dated about a month later, where she talks about how publication changes everything and everything is still the same:

I had stepped into an entirely new, exciting world where you chat with renowned editors and dine with famous authors.

For about 12 hours. Then I got on an airplane, and I came home.

Where, thank goodness, everything is how I left it. My husband, Sam, is still working on our house, building walls and hanging Sheetrock. My daughters are still excited to see me and to find out what treasures I brought in my suitcase from the big city. The chickens are still clucking around the yard, and the tadpoles are still growing in the aquarium.

There are also still dishes to be washed and seedlings to be watered. The checkbook needs balancing, and no one did the laundry while I was away. My mom and I still talked on the phone at 9 a.m., and I still had to remember to get a moose roast out to thaw for dinner. The sun is shining, and will continue to do so until 11 tonight. The cottonwood trees are suddenly fully clothed in green leaves, and the snow is melting off the mountainsides.

I wonder if Ivey still feels the same way? Back then, she was actively posting every few days. You’ll see photos from her subsistence lifestyle and read about some of her nonwriterly duties like mucking out the chicken coop! Now, six months might go by before you read a post about her international tours, her family getting a chance to see the world, and after six years of hauling water, finally drilling a well.

What do you think Eowyn Ivey is doing on Mother’s Day? While I enjoy her book, I know she’s hard at work on her next, Shadows of the Wolverine. Here are some questions I thought of, this Mother’s Day, after reading Ivey’s book.

1. I appreciated the delicacy with which Ivey wrote about motherhood, and about how Faina’s life would change when she became a mother. “Maybe she doesn’t have to give up everything,” Faina’s fiance said. To Ivey, and to readers, I ask: Have you ever had to give up any career opportunities due to your responsibilities as a mother or wife?

2.  When asked whether artists should have kids, Alice Walker said, “They should have children — assuming this is of interest to them — but only one…Because with one you can move. With more than one you’re a sitting duck.” Jane Smiley, who has three children and two step-children, responded to Lauren Sandler’s “The Secret to Being Both a Successful Writer and a Mother: Have Just One Kid” with: “The key is not having one child, it is living in a place where there is excellent daycare and a social world that allows fathers to have the time and the motivation to fully share in raising kids.” I wonder how Eowyn Ivey balances the roles of mother and writer, and what advice she might have for mothers who write? 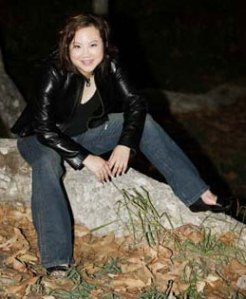 Leslie Hsu Oh lived in Alaska for seven years while her husband worked for the U.S. Army Corps of Engineers. She has hiked, white water rafted, spelunked, and rode on horseback through nearly eighty of the national parks, memorials, and monuments in the United States, Canada, and Great Britain.

Her writing and photography has appeared or is forthcoming in Cirque, First Alaskans Magazine, Fourth Genre, Kids These Days!, Novel Adventures, Rosebud Magazine, Stoneboat, Under the Sun, and elsewhere. “Between the Lines” (a chapter adapted from her memoir-in-progress, Fireweed) was named among the distinguished stories of the year by Best American Essays.

She earned an MFA (Master of Fine Arts) in creative nonfiction from the University of Alaska Anchorage, where she currently teaches, and a masters from Harvard University. She is the recipient of the Rasmuson Individual Artist Award, the first Julius B. Richmond Young Leader in Public Health Award, the first National Award for Excellence in Public Health Leadership, the Sun Memorial Award for exemplifying a commitment to improving the health and well-being of people in underserved populations, and the Schweitzer Award for reverence for life.

After losing both her mother and brother to liver cancer caused by hepatitis B (a disease preventable by vaccine), she founded an award-winning grassroots nonprofit called The Hepatitis B Initiative in 1997 that is still running today in several states. This is a particularly busy month for her, as May is Hepatitis Awareness Month.

9 thoughts on “Book Review: The Snow Child by Eowyn Ivey”